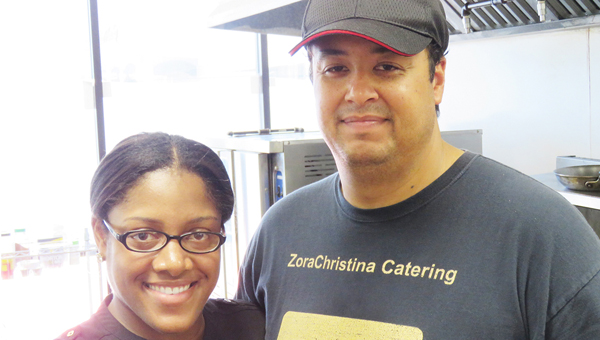 LAPLACE — When Monique McGee-Duronslet gave birth to a stillborn baby girl, everyone told her she needed therapy.

“I didn’t take advantage of all the groups the hospital suggested,” she said. “I just said, ‘You know? I’m just going to cook.’ People talk about comfort food, so I started catering for people. It was just a revelation. I’m happier cooking. I’m happier serving people. ”

Monique wasn’t a cook, nor was she a chef.

“Nursing was my passion,” she said.

ZoraChristina Catering and Café in LaPlace combines the owners’ love of food and family.

She had, however, always watched her mama cook.

“We always had Sunday dinners,” Monique said. “I just watched her.”

She also spent a little time working in kitchens at a couple of local restaurants while working towards her nursing degree. That’s how she met Michael Duronslet, who was a chef for approximately 15 years, working at Petra Restaurant and at Metairie’s Ruth Chris Steak House, among others.

The two naturally hit it off.

“We shared many conversations about food,” Monique said.

Then Michael got tired of the cooking grind and quit to become a St. John the Baptist Parish Sheriff’s deputy.

“I just needed a break,” he said. “It was always something I wanted to do.”

Eventually, they found each other again.

Monique got Michael to renew his love for cooking — and her apparently. They married eight months ago. Monique and Michael are also expecting a new baby son in February.

Now they have put their love of cooking together to open ZoraChristina Catering and Café at 2003 W. Airline Highway in LaPlace.

Opened only four months ago there’s no sign yet, but it’s located in the New Wine Christian Center Shopping Center, on the right.

It is a small, comfortable spot — the walls adorned with a series of paintings done by Monique as another form of therapy for the grieving mom. The business also combines Monique and Michael’s other loves. Zora is Monique’s 12-year-old daughter. Christina is the name of the baby girl Monique lost to Turner syndrome, a rare chromosomal disorder.

Monique said the restaurant itself came out of today’s volatile climate.

“With all the controversy and animosity that people have towards cops, this was a way to pull him back in,” she said. “Plus, he loves it and we work well together. When we’re cooking, we’re cooking from the soul. That’s how the restaurant came about.”

Michael is still a sheriff’s deputy, often pulling double duty. As soon as he finishes a shift, though, he heads to ZoraChristina to put on his chef’s apron.

“It’s a stress reliever,” he said. “I love seeing the smiles on the faces of the people, knowing I did that. It’s very satisfying. It also relieves a lot of tension.”

Michael is the whiz in the kitchen, whipping up such dishes as the ZoraChristina burger, an 8-ounce patty with mayonnaise, spinach leaves, tomatoes, jalapenos, caramelized onion and avocado; and barbecued shrimp and corn grits, which has become one of their most popular items.

Monique, however, has not forgotten her days as a dialysis nurse when she would see patients suffer from their weekend indulgences. You can order that burger with a side of fruit instead of fries.

The catering side also offers a menu of prepared meals for those on a healthy meal plan.

“Everything is fresh,” she said. “We don’t serve any frozen food. We offer healthier alternatives.”

For information about ZoraChristina’s catering service, call 985-359-3673 or email zorachristinacatering@gmail.com.