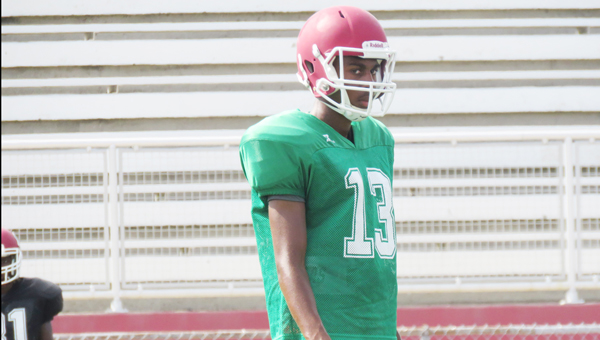 Destrehan sophomore JR Blood has moved from backup to starting quarterback after an injury to senior Kohen Granier. The Wildcats are undefeated and ranked No. 3 in the state. (Lori Lyons/L’OBSERVATEUR)

DESTREHAN —Expectations are always high when it comes to high school football in St. Charles Parish.

So far, Destrehan has lived up to those expectations.

Hahnville, meanwhile, is still working on it.

It has been four years since the Destrehan Wildcats have lost a regular season game.

They haven’t posed a losing record since 2012.

At roughly the mid-point of the 2016 season (with the playoffs added in), Destrehan is where it needs to be and where Hahnville wants to be.

It’s not like the Wildcats haven’t come close to losing, though.

Last week Destrehan let East St. John take a 13-0 lead in the first quarter and spent the rest of the game trying to catch up.

Destrehan got its first lead in the fourth quarter and had to hold on tight to escape Reserve with a 39-20 win.

Against Hahnville Sept. 23, the Wildcats played a solid first half but let the Tigers rally late. Destrehan won it 31-28 on a 27-yard field goal with eight seconds remaining in the game.

Those two games sum up Destrehan’s season in a nutshell, Robicheaux said.

“We need to be more consistent,” Robicheaux said. “We had a strong first half against Hahnville then let them come back, then we had a bad first half against East St. John. We need to learn how to play all four quarters. When you have a young team, though, those things are going to happen.”

The good news is, Destrehan has the toughest part of its schedule behind it and only two district games remaining against H.L. Bourgeois and Thibodaux.

The Wildcats also have overcome its toughest challenge, the loss of senior starting quarterback Kohen Granier to a knee injury.

Granier could return for the playoffs, Robicheaux said, but for now, the Wildcats are relying on sophomore JR Blood to lead them.

Across the river, Hahnville is wondering what it has to do to be taken seriously.

The Tigers are 4-2 but did not receive a single vote in the recent sports writers poll.

That’s despite losses to two ranked teams and a 23-9 record under Nick Saltaformaggio.

Of those  nine  losses, four were to Destrehan, one was a double overtime loss to Rummel, two were to Riverside and one was a quarterfinal loss to eventual state champion Zachary in 2015.

Tigers coach Nick Saltaformaggio said his team is being overlooked, but also has to be better.

“We think we’re going to win every game,” he said. “Our problem is, we haven’t won that big signature game.’”

They one against St. Thomas More comes pretty close.

After a pair of crushing losses to the Cougars the last two years, including a 52-12 drumming last year, Hahnville found a way to rally for a thrilling 42-35 win on Sept. 30.

“That was the biggest win I have ever been involved with as a head coach, including the state championship game (at East Jefferson),” Saltaformaggio said. “That was special.”

But will it be enough to keep the Tigers rolling through the remainder of this season? While Hahnville handled the Terrebonne Tigers Friday, 48-0, this week the Tigers will travel to East St. John for a crucial District 7-5A game.

“They are very good, they are very talented, they have good size and they have great athletes. We aren’t overlooking East St. John one bit. I promise you.”