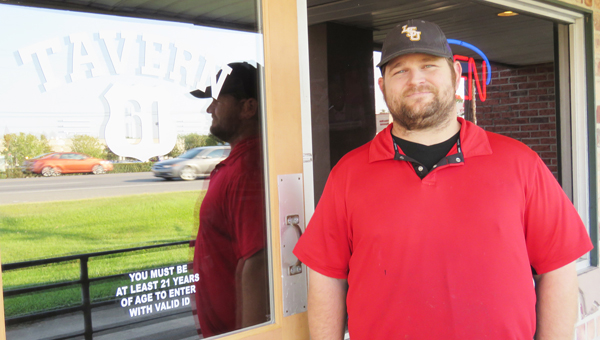 Sean Delaneuville stands outside Tavern 61, a bar and party venue he recently opened on Airline Highway in LaPlace.

LAPLACE — All kids dream of what they want to be when they grow up.

Sean Delaneuville is no different.

He was just a youngster when he began dreaming, and a football and baseball player at Riverside Academy when he first verbalized it.

One day after football practice as he and a teammate exchanged hopes for the future, he said, “I’m going to open a restaurant one day, and I’m going to call it Fatty’s.”

Tavern 61 owner Sean Delaneuville said the bar is a place to gather with friends for some adult beverages, watch important games on a big screen or listen to a local band. (Lori Lyons/L’OBSERVATEUR)

Delaneuville did just that, giving up an unfulfilling position as a construction worker at a local plant to open his first location of the River Parishes favorite in 2006 in historic downtown Garyville. He was 23 at the time.

“It was hard,” Delaneuville said. “I really didn’t know what I was getting into. My mom and dad will both tell you they’re surprised it worked.”

There have been a few attempts at opening a second location that didn’t quite pan out, but Delaneuville didn’t quit dreaming.

He recently opened his latest venture, Tavern 61, at 1421 W. Airline Highway, a sports bar and events venue located in a well-known spot in the heart of LaPlace.

Delaneuville eventually will include some of his famous menu, but for now Tavern 61 is a place to gather with friends for adult beverages to have fun and watch big games on a big screen or listen to a local band. The venue also can be rented out for parties and other events.

“I wanted a sports pub,” he said. “I wanted a place for people who don’t smoke and don’t like the loudness of bars.”

Delaneuville said he found the place by a stroke of luck.

“I saw the (for sale) sign and came in,” he said. “There were five or six others waiting to see it also, so, I told him I’d give him a check today. Then on the way home I asked myself, ‘what have I gotten myself into?”

Delaneuville, 34, said he always has enjoyed cooking and feeding folks in the River Parishes. He used to come home from school and call his dad on the phone to get cooking instructions.

Delaneuville also was inspired by his family.

“When I was a kid in Lutcher, it seemed like every wedding had the same menu,” he said. “It was jambalaya, sandwich trays, chicken wings and my grandpa cooked for the majority of them.

“As a kid we would go to his house and watch him cook and then bring it all to the K.C. Hall or wherever the weddings were. That always interested me.”

Once he opened Fatty’s, it was his late aunt Nancy Brady who got him started in the right direction.

“The first few months I pretty much just sat and watched,” he said. “I didn’t know what I was doing. I learned everything from her. She’s pretty much the reason I have success. She loved to cook, and after she cooked she loved to go out and have fun.”