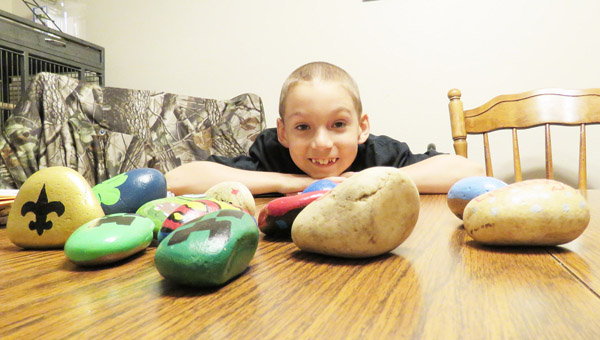 Joseph Carr, 8, sits with the rocks he has painted in his LaPlace home, all of which he intends to bring to hide at The St. Jude Baton Rouge Affiliate Clinic for young patients to enjoy. (Lori Lyons/L’OBSERVATEUR)

LAPLACE — Life has not been easy for Joseph Carr.

At the tender age of 8, the youngster has seen the inside of more hospitals and felt the sting of more needles than most experience in a lifetime.

Nurses are his friends.

Somehow, though, the shy, quiet second-to-youngest of four boys born to Brandy and Michael still manages to think of others.

Joseph was only a few days old when Brandy felt something just wasn’t right with her baby.

“He was discharged from the hospital and, immediately, I knew something was wrong,” Brandy said.

Joseph Carr and his mom, Brandy, have been through a lot since Joseph was first diagnosed with Hirschsprung’s Disease.

She took her son to a series of doctors until they discovered he had Hirschsprung’s Disease, which causes part of the colon to work improperly. It is a birth defect, which occurs in one in 5,000 births and is found in boys more than girls. Doctors hope he will grow out of it eventually, but it was caught at a crucial point.

“He would have died within 24 hours if I wouldn’t have brought him in because he was septic,” Brandy said. “My gut told me. My husband thought I was nuts, but he doesn’t question me now.”

Last year, Brandy’s gut told her something was wrong again.

It began in February with a stomach virus that required frequent trips to the emergency room at Children’s Hospital.

“At first I thought it was related to his colon disease,” Brandy said.

Then Joseph got worse.

“He would not stop throwing up,” Brandy said. “He had a real bad headache and all he wanted to do was lie on the floor. He didn’t want to move. It got to a point where he was incoherent.”

This time, Brandy’s gut also told her to go to Our Lady of the Lake Hospital in Baton Rouge. There, doctors discovered young Joseph had a mass in his brain.

He was rushed into surgery to relieve the pressure.

“The fluid in his brain was swelling so much that he would have died if we hadn’t brought him in,” Brandy said.

Days later, Joseph underwent an emergency operation to remove the tumor, which was quickly closing off his brain stem and cutting off the spinal fluid.

When it was over, the surgeon called Michael and Brandy into a conference room.

“I was scared,” Brandy said. “I thought they were going to tell us they had lost him. He told us, it doesn’t look good but they were able to do the surgery. It actually was two tumors in one and they’ve never seen anything like it before. They did tell us he might have problems with walking and anything that affects the brain.”

“He was able to walk and talk,” Brandy said. “It was like nothing (had happened).”

Joseph’s cancer was so rare, there is no name for it. It resembles Medulloblastoma, another rare pediatric brain cancer.

Joseph began a rigorous treatment of radiation and chemotherapy in March of 2015, making many trips to the St. Jude Affiliate Treatment Center in Baton Rouge. He had his last treatment in June.

Friends, family and even strangers have followed Joseph’s Journey on a Facebook page of that name. There, Brandy not only provides updates on Joseph’s condition, but also puts the word out when they need help.

One of the few things that managed to brighten Joseph’s visits was a setup of snacks for the patients, including crackers, chips, cheese and water donated by a patron.

One day, Joseph overheard his mother and the staff discussing that the patron was no longer able to provide the snacks.

Brandy and Joseph decided they had to do something.

“I put it on the Facebook page and asked my family and friends if they would donate items,” Brandy said. “A lot of people helped out. We got over three loads that I brought.”

A few days after the first load, Joseph went to his mom with his own piggy bank.

Brandy said it made her very proud.

“I just wanted to,” Joseph said.

Joseph wants to spread even more joy to his fellow patients at St. Jude. He, along with hundreds of other children in St. John the Baptist Parish, have joined the painted rocks craze sweeping the area. Not only has he been finding rocks, he has been painting them and intends to bring some to hide at the Center in Baton Rouge for the kids to find. The Carrs also are gathering some rocks for the children at the Center to paint.

“We thought it would be good for them because they can’t get out, you know?” Brandy said.

Joseph, who doesn’t talk much, comes to life when he shows off the many rocks he has found and the few he and his mom have painted.

Joseph also can’t get outdoors much, although he is anxiously awaiting his ninth birthday on Oct. 2. He and his family will celebrate with a party at Sector6 in New Orleans. Brandy hopes to brighten his day even more, by asking friends, family and followers to send Joseph a birthday card this week.