Monica back at practice after brief trip to ER 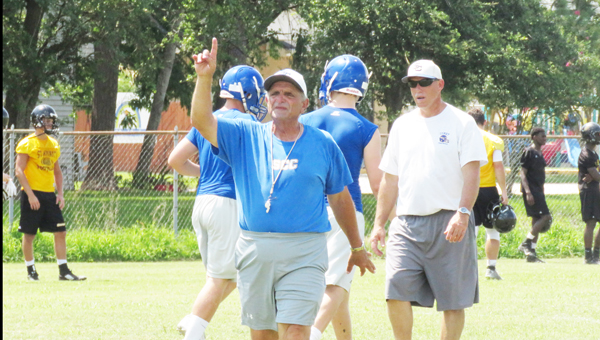 LAPLACE — St. Charles Catholic coach Frank Monica was back at work Monday, preparing his team for Friday night’s match-up against East St. Ascension and cracking jokes about his brief hospitalization.

“I just needed a little R-and-R,” Monica said. “I wanted to hang out in a hospital gown for a little while.”

Monica can laugh now, but he gave a lot of people a scare Friday night. Early reports were that the coach had collapsed on the sideline during his team’s game at Central of Baton Rouge.

Rather, at halftime, Monica told his assistant coaches he wasn’t feeling well. Comets team doctor Dr. Andrew St. Martin asked the paramedics on site to hook Monica up to a monitor, which recorded the coach’s heart rate at more than 200.

Monica was taken from the game by ambulance to a nearby hospital, where he was monitored for several hours.

“By the time I got to the hospital, it had dropped back down,” Monica said. “I was there until 3 o’clock though.”

Monica said he was released with no restrictions.

“I’ll have to follow up with my doctor and have some tests done,” he said. “I just had a stress test in July, before the start of camp, and I was fine.

“I wasn’t even yelling much on the sideline because we were ahead 18-0.”

It may be a good thing Monica wasn’t around for the second half, then,  as the Wildcats rallied, scoring nine points in 37 seconds in the third quarter.

It started with a bad snap on a Comets punt that resulted in a Wildcats safety.

Central returned the ensuing kick to the Comets’ 23-yard line and scored a few plays later to make it 18-9.

The Comets’ offense then stalled. The defense, however, stiffened and Central had to settle for a 37-yard field goal with 7:24 remaining in the game.

Then came a 52-yard interception return with about two minutes remaining. But the defense, somehow, managed to push the Wildcats from the Comets’ 24 back across midfield and held on to win, 18-12.

“It was a confidence builder for us, coming against a (Class) 5A team that was 3-0,” Monica said. “The defense played really well.”

He also gave credit to his staff and his players for carrying on in his absence.

“They know what to do, they know how I think,” he said. “I can count on my coaches.”

This week the Comets host a winless East Ascension team coming off a 34-20 loss to Scotlandville.

It has been a rough start for the Rams, who are 1-3 but have been outscored 122-63 in four games, with 49 of those points coming in their lone victory against Donaldsonville.

The Rams have mustered only eight points in three losses.

Woodlawn (1-3), which also lost its projected starting quarterback before the season began, is coming off a 58-0 loss to St. Amant.

Starter Marquise Darensbourg is still out with a shoulder injury. Backup Shayhan Williams was lost to a torn ACL.

Sophomore Dasmain “Duke” Crosby led his team to a 33-13 victory, passing for 149 yards and three touchdowns.

“He’s a little warrior with a big heart,” Foster said. “He did a great job for us. He made a few mistakes, but that’s to be expected.”

Thibodaux is led by multi-purpose player Amik Robertson, a Louisiana Tech commit. Robertson scored on a 75-yard pass, a 60-yard pass and a 59-yard punt return, plus he threw a 21-yard touchdown pass in game action last week.

The Rebels get a week off before opening district play at Newman Oct. 7.