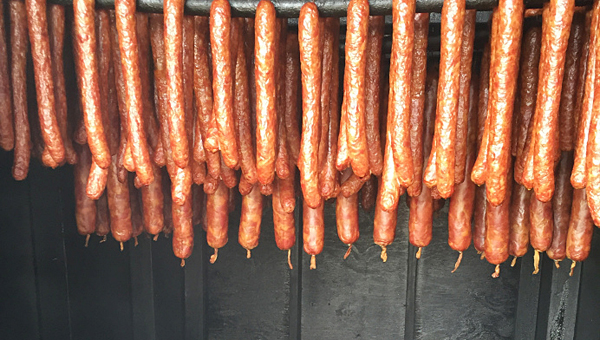 Andouille being smoked at Wayne Jacob’s Smokehouse and Restaurant is pictured at left. (Photo submitted by Matt Moreland, co-owner of Wayne Jacob’s.)

Our Stories, Our History: Andouille

It was a community event in the early days of St. John the Baptist Parish.

As soon as the weather began to cool, neighbors would gather for “une boucherie cochon” — the French phrase for butchering a pig.

Ray Boé participated in many boucheries in his lifetime, some at the home of his parents in Mt. Airy and others at his neighbors’ homes.

Ray Boé has been an active part of many boucheries, some at the home of his parents growing up in Mt. Airy and others at his neighbors’ homes.

“We didn’t have refrigerators back then, so the meat was preserved by smoking it,” Boé said. “My dad was a butcher and while he and the men were carving the meat, the women were cleaning out the intestines.”

According to Boé, after the intestines were emptied, they were scraped with a knife, washed, then hung on a clothesline to dry so they could later serve as casings for the sausages.

“My dad used a cow’s horn, with the tip cut off, to funnel the meat into the casings,” Boé said.

“Sometimes it took two days before we were finished. By the time it was done, we had made sausage, boudin, hogshead cheese, cracklin and andouille.”

Andouille, the French word given to the sausage made of chopped pork and seasonings, was prepared by families throughout St. John.

The resulting product varied according to the culture each family represented. Some kept the recipe and the process of smoking the andouille a secret.

Many of these family recipes are still used today in the commercial production of andouille, including Cox’s Meat Market in Reserve.

Also in Reserve, Don’s Country Store sells its own andouille.

“It’s made the same way it was when my dad opened the store in the early 60s,” Greta Cancienne Kenney said.

“We proudly use the same secret recipe that has been used since our founding in 1950,” Matt Moreland, co-owner of Wayne Jacob’s Smokehouse, said. “We are proud to continue this strong tradition of the German coast.”

In 1972, the citizens of LaPlace turned their appreciation for andouille into a celebration with the first Andouille Festival held Oct. 28-29 of that year. Then-Governor Edwin Edwards officially declared LaPlace as “The Andouille Capital of the World.”

The festival, held each October, is slated for Oct. 14-16 this year at the Thomas F. Daley Memorial Park in LaPlace. It will feature music, games, rides and many dishes prepared with andouille.

Two of last year’s attendees were Louisiana native Sue Pearson and her son Josh, who currently live in Arizona.

“The Andouille Festival is nothing like the festivals in Arizona,” Pearson said. “There was so much delicious food to enjoy. What a fun event!”

“I can’t believe you ever left this state,” Josh jokes.

The weather will likely turn cooler next month, and neighbors near and far will gather at the Andouille Festival to enjoy a fun-filled weekend that will revolve around our regional food.

Although boucheries are no longer common events here, local businesses ensure the availability of andouille to customers in St. John and worldwide.

On some mornings, as soon as I wake up my heart beats out one word. A few days ago it... read more