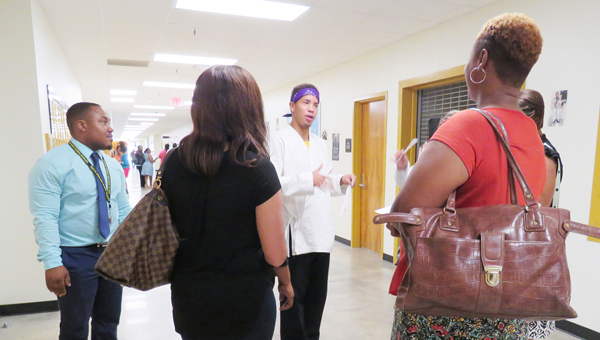 BE OUR GUESTS: Public schools opening doors to change perceptions

That’s why senior Christian Barrow was dressed as The Karate Kid as he led a group of businessmen and women and St. John the Baptist Parish School District administrators through the hallways of his school.

Beaming with pride, Barrow showed off the school’s Wildcat Café, where students were busy preparing a meal for the visitors after the tour.

Wildcat Café instructor Lydia White talks to tour takers Wednesday about what ESJH students were busy preparing for them to enjoy after the tour.

He explained the different career pathways available to students, some of whom will go on to college and some of whom will follow a more technical path to a career. Barrow is on a medical track, hoping for a career in the medical field.

When the tour was over, the visitors agreed that Barrow and his school had delivered a winning performance in the first Patrons Tour, during which the public was invited to tour the school, see its classrooms, meet the administration and students and see what good things are happening.

The district plans to conduct a Patrons Tour each month at a different school.

Approximately 20 residents, representatives of local businesses and other district employees arrived at East St. John and spent the morning hearing about all the school has to offer its students, who then will go out into the local business-world. Patrons then toured the school, which was completely revamped after being flooded during Hurricane Isaac in 2012.

“(We hope) to dispel rumors about East St. John High School,” said principal Corey Butler. “The (ideas) that the kids here are not worthy of being bragged upon, the programs that we offer are not industry-based (are false). We’re a school that has a school-performance score that’s about to be in the 80s. That puts us in a good place. To say that the school has been devastated by Hurricane Isaac, the school has responded and the kids have responded.

“The most important thing we want them to see is the character displayed that we instill within the kids. It doesn’t matter what they want to be, as long as they want to be something.”

Realtor Lorraine Edwards said she has heard many unflattering things about the school and came to Wednesday’s event with some preconceived notions. All of those were dispelled, she said.

“Things I had heard, especially with the rumors of the bullying and the fighting and things of that nature and kids being arrested, I don’t think those things are going on here,” Edwards said. “And the curriculum they have set forth preparing them for college is definitely a plus.”

Barrow, an honor student taking advance placement courses, which have earned him college credits at Southeastern Louisiana University, said he is extremely proud of his school and hoped to convey that message.

“I thought it was really nice,” Barrow said. “Just looking at it from the standpoint of how much our school board actually puts into our school, while actually being a student here and how it’s going to affect my education and where I go in life, I thought this was a great experience being able to talk to (everyone) and relate my experience,” Barrow said.

Barrow hears the negative things said about his school and wants to correct that image. He said those in his neighborhood say East St. John High students have a tough time getting jobs and are routinely suspended.

Nothing could be further from the truth, Barrow said.

“For the majority of students here, we’re just a big family and we’re fighting for our education right now,” he said. “When we get that kind of reputation, it looks bad on a resume. So many people won’t hire us just because of that perception of East St. John students.”

By all accounts, this week’s mission to dispel those myths was accomplished.

“I have a different attitude about this school, for sure. Now, I don’t know about the school system as a whole because I haven’t seen it as a whole, but I was very impressed with the enthusiasm I see. I’m impressed that all of the noise I heard was educational noise, not just nonsense noise. The children are not groaning. They’re actually interested in what’s going on. They’re taking an active part in their education. I was impressed with the students, the faculty, the administration. It’s like a string of pearls.”

Retired teacher Ann Harvey shares her opinion during the tour.

LAPLACE — There are 25 children in foster care in St. John the Baptist Parish who need someone in their... read more