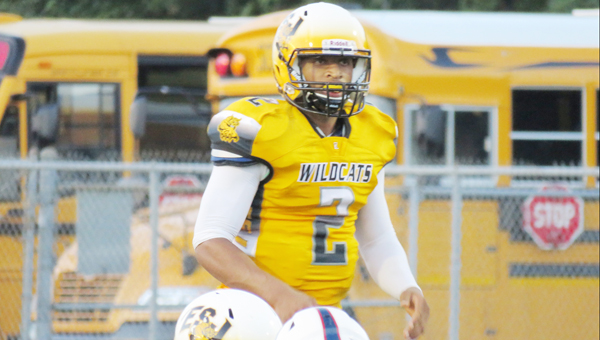 RESERVE — All coaches know injuries are part of the game in football, but some coaches in St. John the Baptist Parish might want to invest in some bubble wrap.

It’s only the fourth week of the season, but the injury bug has bitten some teams hard already.

Senior defensive back Shayhan Williams got the start in his stead, and was on a pretty good roll.

Despite wet conditions, Williams was 8 of 16 for 110 yards and a touchdown. He also ran 16 times for 67 yards. Then he took a hit to his knee and left the game in the second quarter.

Williams tried to return for the start of the second half but was too hobbled to continue.

Coach Aldon Foster went to sophomore Dasmain Crosby to get his team through the game, which the Wildcats lost 16-14.

His starter, Austin Alexander, took a hard hit in the second quarter of Friday night’s game against Southern Lab. He left the game with what was later diagnosed as a mild concussion. Alexander will miss this week and maybe next week too. Three other Rams players left the game with injuries, as well.

“We need a triage over here,” Rams coach Brandon Walters said. “We’re licking our wounds but we’ll be OK.”

This week, Foster and his quarterbacks coach, Ryan Perrilloux, are working hard to get someone ready for this week’s District 7-5A opener against H.L. Bourgeois, which also happens to be homecoming.

Monday afternoon Perrilloux was putting Crosby and freshmen Sean Shelby and Lonnie Ellis through their paces but hoping Darensbourg would be ready to return.

No decision had been made by L’OBSERVATEUR’s press time.

“We’re still playing with it,” Perrilloux said. “I thought they handled it well, being put in that fire. Of course we’re hoping Marquise can come back.”

The Braves are coming off a 21-16 win over South Plaquemines to improve to 2-1.

Bourgeois also has done some quarterback shuffling. June Lecompte returned to the spot this week and scored one touchdown.

Instead of running football practice this week, Walters was running a MASH unit.

Besides quarterback Alexander, who suffered a mild concussion at the hands of the Kittens, the Rams also lost Trey Thomas to a possible rotator cuff injury, Jarrion Frank suffered a neck injury, JaJuan Pierce suffered a hand injury that later required stitches and another player suffered bruised ribs.

Under the circumstances, the Rams managed only 165 yards of offense while allowing 336 to Southern Lab.

“It was one of those nights where you were asking, ‘what else can go wrong?’” Walters said. “We prepared the other kids, but you just never know how they’re going to react until it happens. We were able to fight though it. I hope they’ll all heal up, and we’ll bounce back.”

The good news is, receiver Jamal Walters, who suffered a concussion against St. James, returned to the lineup.

The quarterback situation is still up in the air, however. D’Andre Gaudet filled in for Alexander last week. Kedric Gray also could see some action.

Kentwood is 0-3 but is tied with Logansport as the No. 6 team in the state in Class 1A.

Fortunately for the Rebels, the only thing beat up last week was the football field.

With a steady rain falling for hours before and during the game, the field became a muddy quagmire. Jersey numbers became impossible to read. Shoes, even one belonging to a referee, were left in the muck.

“I don’t know that we could have played on it much longer,” Rebels coach Bill Stubbs said. “It was almost to the point where it was dangerous.”

The Rebels didn’t seem to mind, however, after they came away with their second win in two years against Class 5A Hahnville.

Stubbs said games like that one show smaller schools can compete with the ones with bigger numbers.

“We might not have the numbers as those teams with larger classifications, but what you’re putting on the field every year should be in pretty good shape,” he said.

“The skill levels might be a little different because they’ve got more kids to choose from.”

Add in Friday night’s weather conditions, and anything can happen.

“I’m real pleased that we had one turnover, and it really equated to a punt,” he said.

“It didn’t really affect us. Our backs ran the ball well. Jordan did an excellent job of managing the game. The defense kept coming to the pump. Those are all the formula for the makings of a really good football team.”

The Rebels, who are ranked No. 5 in the state in Class 2A, face a Plaquemine team coming off a 42-21 loss to St. Thomas More.

The Green Devils were locked in a 14-14 tie at the half, only to see St. Thomas More score four touchdowns in the second half.

The Central community was hard-hit by the devastating floods last month. The Comets community intends to help.

The St. Charles Quarterback Club will donate half of the money collected from its drive-thru Quarterback Club dinner to a Catholic charity associated with the Central High School community.

“We’ll try to help them out a little bit,” coach Frank Monica said.

Monica hopes his team will not be so charitable on the field.

The Comets are coming off a tough loss under very tough conditions in Houma after several inches of rain fell Friday.

“That’s no excuse,” Monica said. “They had to play on the same field. We felt like they were a pretty good football team from the get-go.  We just didn’t do the things we needed to do to win. We kept making mistakes and played behind the chains all night.”

The Terriers managed to convert 8 of 12 third downs, limiting SCC to only 32 offensive snaps.

This week the Comets travel to Central, which defeated Tara 42-0.

“They have a lot of confidence and energy,” Monica said. “Last week was their first week back in school, but you can tell (on film) that they’ve had a lot of practice. We will have to grow up fast. We just aren’t doing the things it takes to win.”