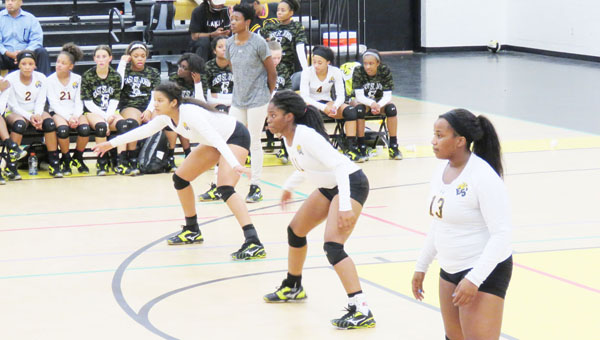 RESERVE — The St. Charles Catholic and East St. John High volleyball teams have gotten off to a rough start this season.

The Lady Wildcats are adjusting to a new head coach while the Lady Comets are trying to find the right team chemistry.

When the two met Wednesday afternoon at East St. John for a non-district volleyball match, both teams showed signs of struggle, but the Comets left with a 3-0 sweep.

“It was very slow,” she said. “We’re used to a much quicker game. We played well at times. I thought our passing was rather poor, but we fixed that.”

“We had absolutely no offense,” she said. “Our stats were horrible. It was the worst (match) all season.”

The Wildcats did rebound some with a hard-fought pair of losses at the Brusly tournament Thursday.

Chardae Berthelot had 17 kills in the two matches. Jamaiyah Haynes had 25 assists.

“We fell short because we didn’t stick to our game plan,” Allen said. “(We were) a different team. We actually played as a team. We just had too many minor silly mistakes.”

The teams will meet again Tuesday at St. Charles. In the mean time, the Lady Comets will travel today to a tournament in Ruston, and St. John continues to compete in the Brusly tournament.

The Riverside Academy Lady Rebels, meanwhile, are continuing their roll. The team advanced to the finals of the Grace King Tournament last weekend, losing their first match of the year to Academy of Our Lady.

They defeated Thibodaux 3-1 Wednesday and Ecole Classique 3-0 on Thursday.

The Rebels are 11-1 as they prepare to host Thomas Jefferson Tuesday.

West St. John High has gotten started with victories over Donaldsonville and East  Iberville. and a loss to St. James. Kyli Vontoure, Shiah Thomas and Talika Howard are the leading players, according to first year coach Dayna Nicholas.