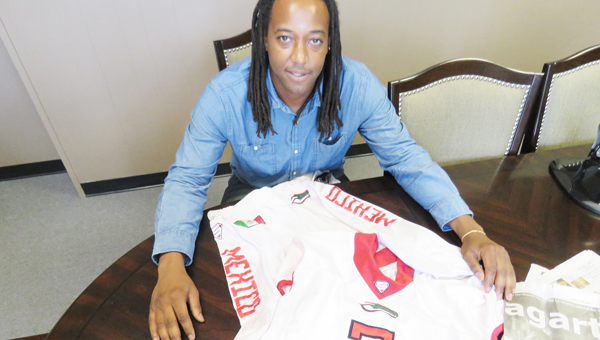 GARYVILLE — At the ripe age of 33, Darwin Pittman finally has everything he has ever dreamed of.

The 2001 East St. John High graduate, a former baseball and football standout, is being paid to play football.

Pittman is the starting quarterback of the Tampico, Mexico, Lagartos (that’s Gators), a new team in the North American Indoor Football League. The upstarts just won the league championship in its first year, making the team very popular in their small community.

Pittman has become one of the faces of the team. At 6-foot-4, he certainly is easy to spot, and is quickly recognizable by his long braids. That makes things such as walking down the street a little difficult at times, he said.

“I’ve signed autographs before, but I never had an opportunity to let my food get cold because I was signing so many,” he said. “That was something totally new. We have a huge fan base.”

Mexico is just the latest stop for Pittman, who played quarterback then wide receiver for the Wildcats from 1997-1999. From there he went to Oskaloosa-Walton Junior College (now Northwest Florida State), then on to Southern University for the 2004 and 2005 seasons.

After that, he chased his football dreams with a series of Arena League teams from  Rockford, Ill., to Houma, to South Carolina to West Virginia.

“After West Virginia I kind of hit an athletic career crisis,” Pittman said. “I didn’t know where I wanted to be or what I wanted to be. That left me without playing at all. It was a turning point.”

He also offered his life experiences as the coach of the St. John Junior Wildcats 11-12-year old football team, a job he’s been doing since shortly after his college days.

It was while he was teaching at West St. John Elementary that Pittman realized he really missed playing.

“Those kids were asking me, ‘Coach, why aren’t you playing? Why did you stop playing?’” Pittman said. “I never had an answer for them. One day, one of the kids was like, ‘Coach, if you went back to playing football again, do you think you’d be good? Would you win a championship?’

“I was, like, ‘Well, when I left the game I was good and nobody ever told me I can’t play any more.’ They said, ‘Well, go back and play.’ It’s kind of strange how that conversation with my student was that day and, that night I received a call from Mexico.”

Just a few weeks later, Pittman found himself in a strange land, surrounded by strangers — except for a coach who had been recruiting Pittman for several years. “It was a real decision-making process,” he said. “He told me to go Google it and I did, and there were some things that would make the average person stop and think about it. I was, like, ‘Do I really want to go to Mexico to play football?’ It wasn’t really about Mexico, it was, do I really want to play football again?”

He did, and now says it was one of the best experiences of his life.

“In order to do something you’ve never done before you have to go places you’ve never been before,” Pittman said. “For me, it was Tampico, Mexico. I was just walking out on faith. It was a great experience. For my first time ever playing professional ball, I felt like a celebrity.”

People stopped him for autographs and pictures. Villagers invited him and his teammates home for dinners. He had groupies. The press nicknamed him “Prime Time.”

“I’m definitely going back,” he said.

Well, unless baseball calls — which it has.

Next month Pittman has a workout for the New York Mets, with an opportunity to play minor league baseball. He would give up all he has for that.

“I would give it up today if the Mets call me,” he said. “I guess sometimes you have to go with what’s in your heart. I love baseball. My heart, my soul, my love, my drive is baseball. I love everything about baseball even though I’m a quarterback.”

Baseball has always been Pittman’s first love. He had been a 49th round draft pick of the Tampa Bay Rays in 2001 when he was a first baseman and pitcher at East St. John. In between his football stops, he also chased his baseball dreams from an independent league in New York all the way to Dallas.

Until the tryout, Pittman is back at home, tucking away his press clippings (which are in Spanish, which he doesn’t read), coaching his youngsters and giving back in honor of his own mentor, the late Victor Sanders.

“Coming up, Victor Sanders took a lot of time out with me and my friends in Garyville,” Pittman said. “I feel like, if you came up playing sports in that time, you owe a lot to those guys who took time out of their busy schedules to work with us.

“When he died, I’d say he took the soul of Garyville with him. He wasn’t just a coach, he was a mentor.”

Concern for divorce may have led to husband’s fatal gunshot, police say