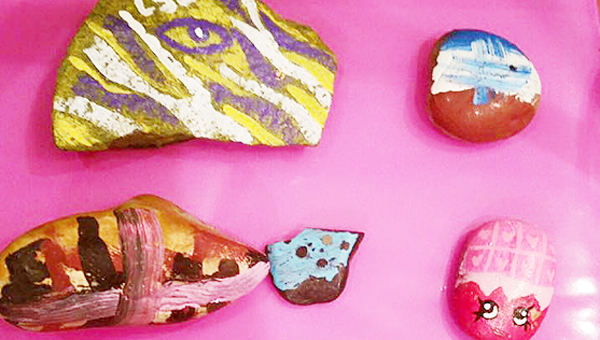 Theresa Perrilloux Dunn showed off these rocks on L’OBSERVATEUR’s Facebook page created for the discovery game sweeping the country.

LAPLACE — Theresa Perrilloux Dunn just wanted a snowball, so the LaPlace resident stopped at one of her favorite spots on Dominican Street.

As she placed her order, she happened to look down. That’s when she saw it.

“It was just sitting there on the ledge at the snowball stand,” Dunn said.

Dunn had just found her first painted rock, and thus became swept up in the latest fad sweeping St. John the Baptist Parish and other areas — rocks.

Specifically, it’s the painting, decorating, hiding and finding of rocks as a way to spread a little cheer. It certainly offers something for everyone.

There are those who spend their time on the creative end, using everything from nail polish to paint to permanent markers to decorate a bunch of rocks. Some are given a little extra, such as a positive message.

Then comes the hiding part, although it’s really more of hiding them in strategic locations. Rocks can be found in parks, restaurants and even stores, although that practice is discouraged by Laurie Mouton, the organizer of the “St. John Parish Rocks” Facebook page. No one wants to be accused of stealing.

The fun part, however, is the finding, as Dunn found out Monday.

With a stick figure head drawn on each side, the small, colorful painted rock is now one of Dunn’s treasures.

“It’s on my mantle,” Dunn said. “I can tell it was drawn by a child. That makes it even more special.”

Dunn is one of the many residents who have helped spread the word.

“I had people calling me and texting me, asking me ‘What’s up with the rocks?’” she said. “I just said it’s this crazy, wonderful fad that’s sweeping our parish. I saw a dad and his little girl out the other day looking for them with an Easter basket.

“I think everybody interprets what it means different. This is something families can do together. My son and daughter-in-law sat down with their kids the other day and painted 30 rocks to pass out. They made it a family activity.”

The craze is believed to have begun in Vancouver, Wash., and has trickled down throughout the summer. There are similar Facebook groups for St. James and Charles Parishes, as well as others. Finders are encouraged to post photos of their treasures in the various Facebook groups.

Now that she is a finder, Dunn wants to be a giver.

“I’m going to go paint some rocks,” she said.