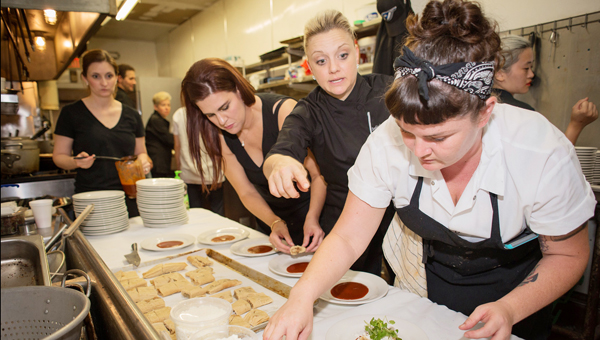 LAPLACE — After Natasha Clement won the top prize on the Food Network’s All-Star Academy in April, a lot of people wondered what would be next for the LaPlace resident.

The answer is, a lot.

She still works at La Petite Grocery in Uptown New Orleans and she has launched her own company, a by-appointment private dining service. She’s judged a couple of cooking competitions, and she occasionally gets spotted by fans.

“I went to a fair to judge a crawfish competition and this little girl came up to me like I was some kind of super star,” Clement said, seemingly stunned by the attention she gets, even in a local coffee shop.

So Clement had to think outside the box for her latest venture, an exclusive five course wine dinner held Sept. 3 at Belle Terre Country Club.

Clement said she was inspired by a similar event hosted by Claudia Sandoval, who was the Season 6 winner of MasterChef on FOX. Clement first gained local notoriety when she appeared and was eliminated on the first episode.

Clement helped with Sandoval’s event, a 200-person wine dinner in California, exploring wine country and various foods from Sandoval’s home in Mexico to come up with the menu.

“The inspiration came from all that I learned with that and on MasterChef,” Clement said. “That kind of sparked an interest for me to come and do an event here with a menu that hadn’t really been done around here.”

The event took three months to plan, but did not go off without a hitch. Right in the middle of everything, the LaPlace water main ruptured and the area was put under a boil-water advisory.

“We were boiling jugs of Kentwood water to wash dishes in between courses,” Clement said.

Still, she said, the event was a hit.

“I’ve gotten great feedback from everyone,” she said. “I will do it again.”

In the meantime, Clement is focusing on her new venture, Sophisticated Southern Plates. It’s a rather novel idea in which the chef brings the dinner to you — by appointment.

“I cook on site and in people’s homes, anything from a shower or an engagement party to a five course sit down dinner for 10,” Clement said. “Even if couples want to get together for a cooking class, then I will come and entertain and cook in their home.

“The one thing is: Everybody thinks after you win that you’re rich. That is so not the case. So, after taxes, I took my $2.30 and invested it into an idea.”

Clement, who tests all of her dishes on her husband Chesson, son Ethan and Chesson’s children Corrine and Brady, would love to open her own restaurant some day but says the competition is fierce. She doesn’t want to be just another southern chef, either.

“This is a hard industry for me to flourish in right away,” she said. “This is going to be a long road, which is why I did a menu so unique for the wine event. I wanted to bring in other types of food in a southern, sophisticated way. It’s very traditional to how your grandma taught you to cook, but then there are other ingredients and inspirations from new modern and updated venues.”

For Burt Cashio, WCKW Radio Disc Jockey, the current T-shirt craze is a good way to get across his personal... read more