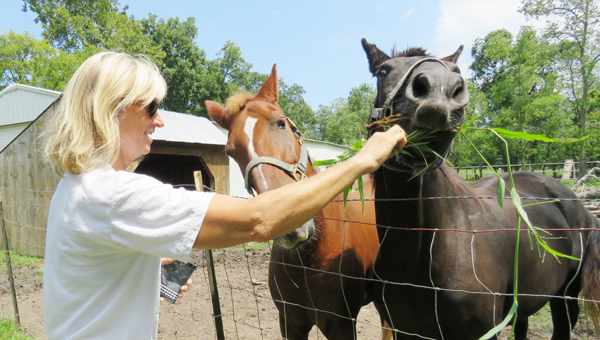 Anita Hefler of the Therapeutic Riding Center in LaPlace, gives a grass treat to Cisco, center, and Bella, a pair of horses from St. Amant who were displaced by the recent floods in Ascension Parish. Hefler is hosting the horses while their owner, Emma Roccaforte, works to recover. (Lori Lyons/L’OBSERVATEUR)

As homes and farms were flooded and their owners fled, pets, cattle and horses were left behind. While many perished, some were rescued.

A few of those managed to find their way to LaPlace.

Anita Hefler oversees rescued horses China, from left, C.J. and Oliva. Their home pasture in St. Gabriel was flooded with four feet of water. Soon they will move on to Texas.

Anita Hefler, the executive director of the Greater New Orleans Therapeutic Riding Center in LaPlace, has welcomed five horses who were rescued after the floods and needed a temporary place to stay.

C.J., China and Olivia are originally from St. Gabriel, but their home pasture took on four feet of water. They were originally brought to the rescue area at LSU before their owners got them to LaPlace.

“They were looking for a place but everything was filling up,” Hefler said.

Now the three are munching on the grass in the main arena at the Riding Center in LaPlace while waiting for a ride to a relative’s home in Texas. Hefler said a volunteer group will be coming to get them soon — and bringing some much-needed hay, which is in short supply these days because of the floods.

While they appear to be content with no outward signs of trauma, Hefler said the three have been through a lot.

“These three are like glued to the hip to each other,” Hefler said. “We tried to move them into a stall because we had a class we were trying to get going. They really are quite traumatized compared to the others, who actually had more water. They actually started flooding after everybody else because the water made its way down.”

Meanwhile, over in the side pasture, Cisco, an already twice rescued Wild Mustang, and Bella, a Tennessee Walker from St. Amant, are enjoying their new digs while their owners regroup after the storm, which flooded their house and property with five feet of water. They had a short stay at the Lamar-Dixon Center in Gonzales before making their way to LaPlace.

“They’ll stay here as long as they need to,” Hefler said, adding they will be moved to the bigger arena once the others head to Texas. “They’re easier to move around and they’re good buddies with each other.”

Hefler said hosting the horses is the least she can do to help the recent flood victims. She said many stepped in to help her after Hurricane Isaac flooded much of LaPlace, including the Riding Center.

“We completely understand what these folks are going through,” she said. “We received a lot of help from others. This is our way of paying it forward. We have a place for them. It hasn’t cost us anything to look after them, other than time.”

Opened in 1998, the Therapeutic Riding Center offers riding sessions for children and adults with various disabilities such as muscular dystrophy, cerebral palsy, visual impairments, Down syndrome, autism and other conditions..

“The movement the horse provides is most similar to the human walking gait,” Hefler said. “People who don’t walk or don’t walk well get normalized movement on the horse. It helps them develop upper-body strength, balance and coordination and head control. For those with tight muscles, the movement of the horse helps stretch the muscles.

“Kids with autism benefit from the movement the horse provides. (They) usually self-stimulate — you’ll see them rocking or flapping — because the brain is looking for movement. When they’re on horseback, the brain doesn’t have to do any of that because it’s getting motion from the horse.”

Hefler said they hope to resume classes later this month. Therapy classes are held Tuesdays and Thursdays at 5:30 p.m. and 6:30 p.m. and Saturdays at 9 a.m. and 10 a.m. at the Riding Center, located at 152 Shadowbrook Lane in LaPlace.

The Riding Center will hold a volunteer training from 9 a.m. to 11 a.m. today for those wishing to help out at the center. The class will teach volunteers about how the horse perceives the world and how to work with the children with disabilities.

Students must be 13 years or older and are urged to wear comfortable clothing and closed toe shoes. Service hours may be earned for volunteering at the Riding Center.

Tickets are available online at gnotrc.com.

While other parts of the country welcome September’s promise of cooler weather, here in southern Louisiana it’s more heat and... read more