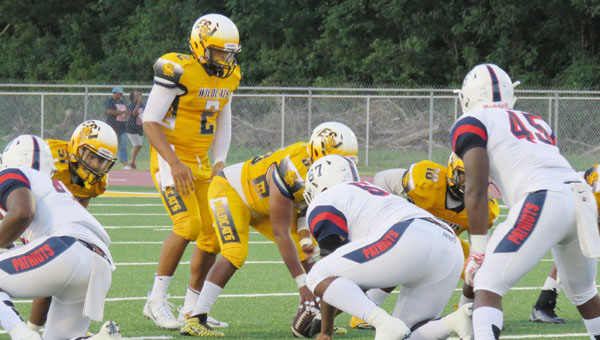 East St. John quarterback Marquise Darensbourg prepares to take a snap during Friday nighit’s non-district contest against the John Ehret Patriots. Darensbourg ran for two touchdowns and passed for another late in the game, but the Wildcats fell to the Patriots 41-21. Darounsbourg would finish with 217 yards passing and 92 yards rushing. (Lori Lyons/L’OBSERVATEUR)

RESERVE — The John Ehret Patriots are feeling mighty at home in Reserve.

For the second straight week, John Ehret came to the River Parishes town and left with a victory. This time it was a 41-21 win over the East St. John Wildcats at Joe Keller Stadium.

Just as they did in last week’s victory at Riverside Academy in Reserve, the Patriots used their vast arsenal and speed.

Quarterback Travis Mumphrey Jr. ran for 113 yards and a pair of touchdowns, including an 80-yard sprint on the first play of the second half.

He also threw a pair of touchdowns, both to Jamal Houston.

One of those covered 72 yards in which Houston simply outran every East St. John defender. Houston also had a 21-yard touchdown run.

The Wildcats, meanwhile, were stifled by the Patriots’ stout defense.

Their first possession ended when quarterback Marquise Darensbourg was intercepted by Terrell Bailey.

He would nab another interception in the third quarter.

East St .John punted twice and turned the ball over on downs twice in the first half.

The Wildcats would not score until the 2:11 mark of the third quarter, after getting a little bit of help from John Ehret.

A pass interference penalty helped the Wildcats get to the Ehret 33. On second-and-10, Darensbourg ran right, fumbled and got a lucky bounce to advance to the 25. Darensbourg then connected with Calvin Gardner for a 25-yard score. Aldo Reyes’ PAT cut the Patriots’ lead to 34-7.

After the Patriots turned the ball over on downs, the Wildcats got a few more breaks. A personal foul and a pass interference penalty by Ehret helped East St. John get to the 12-yard line From there, Darensbourg ran it in — after he ran over one of the referees. Reyes’ kick made it 34-14 with 7:56 remaining in the game.

The Wildcats then drove 42 yards on four plays, again with the help of two pass interference penalties.

On third-and-goal at the 10, Darensbourg scored with 4:00 remaining in the game.

The Patriots added another score late in the game to cap the scoring.

Darensbourg finished 21 of 33 for 217 yards and one touchdown with two interceptions.

He rushed for 92 yards and two touchdowns.

The Rebels, ranked No. 5 in Class 2A, notched their first victory of the season on the road in Baton Rouge.

Jordan Loving passed for one touchdown, but the Rebels did most of their damage with the ground game.

Hardell Mack ran for one score and Jeremy Gibson ran for two.

Riverside’s defense also forced a pair of turnovers to hold off the Eagles, who are the No. 7 team in Class 3A.

The Comets scored on all four possessions of the first half to take a commanding 28-0 lead.

Joe Chiarella scored the first touchdown on 3-yard yard. Philip Tran scored on a 20-yard run and a 10-yard touchdown in the second quarter to put the Comets ahead 21-0.

On the first drive of the second half, Darrin Blystad scored on a 36-yard pass from Lloyd Nash.

Thomas Jefferson scored with a a minute remainin in the game when Darnevon Camille broke free for a 45-yard run.

The Comets held Thomas Jefferson to 75 yards on the night, including 51 yards on that final drive.

The Rams got their first win of the season against the Tigers.

Austin Alexander was 5 of 9 for 134 yards and one touchdown.

He also ran for 118 yards on 15 carries. Dedric Gray scored three touchdowns on a 9-yard run, a 72-yard reception from Alexander and a 23-yard run.

Dontrell Davis scored on an 84-yard kickoff return in the fourth quarter.

RESERVE — The St. Charles Catholic volleyball team went on the road this week and felt a few bumps. The... read more