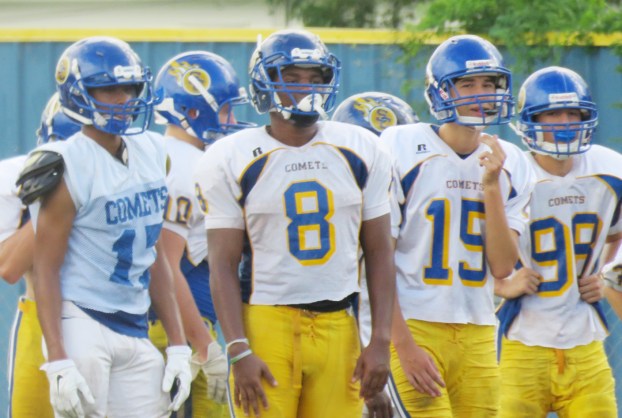 Monday was no holiday for the Comets, including Jaylaun Hartzog (No. 17), running back Narquez Jones (No. 8), kicker Andrew Rodrigue (No. 15) and Ahmed Bell (No. 98), who were back at practice working on getting better for Friday night’s game against Thomas Jefferson. (Lori Lyons/L’OBSERVATEUR)

LAPLACE — St. Charles Catholic coach Frank Monica isn’t one of those coaches who celebrates winning for the sake of winning.

Even after his team earned a solid 27-19 victory over Class 5A opponent Thibodaux in Friday night’s season opener, Monica was still seeing his team’s glass as half empty.

“I’m very disappointed,” he said. “I thought we played very poorly. We had an opportunity to put them away and we didn’t. I thought we played better last week in a jamboree contest than we did (in week 1). We just need to take care of business. We might get some atta-boys for winning, but I’m not pleased at all with our performance.”

Monica was especially disappointed in a late fumble the Tigers returned for a touchdown.

“Just those little things,” he said. “We have to take care of the ball. We look like a clumsy team. ”

There were a few surprises for Monica. Junior running back Narquez Jones emerged as a reliable ball carrier, rushing for 157 yards and one touchdown on 23 carries.

Another bright spot was kicker Andrew Rodrigue, who came through with field goals of 27 and 38 yards. He also sent every one of his kickoffs into the end zone for touchbacks.

That was a big key to the game, Monica said.

“He might have won the game for us just for the fact that their No. 8 didn’t have any returns,” Monica said. “He kept the ball out of their hands.”

St. Charles will get another test this week against Thomas Jefferson. Monica is familiar with the Jaguars, who compete in the Comets’ 7-on-7 summer league.

“They are very athletic,” Monica said. “Their skills are much better than our skills.”

This could be the marquee game of the week.

Ehret’s defense was stout against Riverside, and the running game was strong.

Brandon Brown led the attack with 167 yards on 27 carries, but he had help from a slew of speedy runners. Quarterback Travis Mumphrey Jr. passed for 83 yards and ran for a touchdown.

Then again, the Wildcats were impressive in their 38-0 victory over Archbishop Shaw.

Marquise Darensbourg will give that Patriots’ defense a test.

He finished Friday 10 of 22 for 149 yards and three touchdowns and he ran for 75 yards and another score.

Shayhan Williams also had a 44-yard punt return for the Wildcats.

This is another marquee matchup — with history.

Riverside beat Parkview 27-19 last year, then both ended up in the Superdome.

Riverside was the 2015 Division III state runner-up. Parkview won the Division II title. Both opened 2-16 with losses to fellow Dome travellers: Riverside lost to Ehret, 16-13; Parkview lost to Division I champion Catholic with the help of six turnovers.

After a year off due to injury, quarterback Jordan Loving looked sharp last week, passing for 152 yards and one touchdown. He ran for another. Jeremy Gibson handled most of the running duties and rushed for 74 yards on 19 carries.

The season got off to a rough start for the Rams, who faced a lengthy weather delay then a determined St. James High team.

WSJH lost to St. James for the first time since 2007 in the annual Railroad Classic.

First-year starting quarterback Austin Alexander did score the Rams’ lone touchdown late in the game on an 8-yard run.

Things get no easier this week for the Rams, who face a Donaldsonville team coming off a 30-27 thrilling win over Assumption.

RESERVE — Riverside seemed to have done everything it needed to do to stage a comeback against John Ehret in... read more