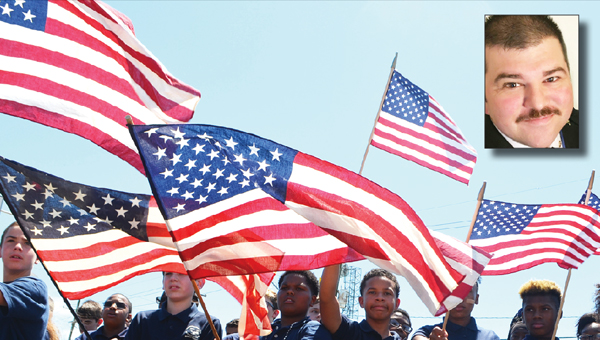 Colleagues of fallen St. John the Baptist Parish District Fire Chief Spencer Chauvin say he is the person they would have called upon to plan the perfect funeral for one of their own.

This week, they had to do it for him.

Chauvin, 36, who was struck and killed by an unlicensed driver Sunday morning while working a crash scene on Interstate 10, was laid to rest Thursday in ceremonies filled with honor and tradition.

Flanked by Louisiana State Police motorcycle escorts, the fire truck holding Spencer Chauvin is led onto Airline Highway Thursday afternoon before heading to Edgard for the funeral and burial.

It was important on this day, said family friend St. John Parish Lt. Chip Wale, who helped oversee the ceremony. But there was no precedent. Chauvin is the first St. John Parish firefighter to die in the line of duty.

“Spencer would have been the guy to do all of this,” Wale said. “None of us knew what to do. We had to call the State Fire Marshal’s Office and we just took what we wanted to use.”

State Fire Marshal Butch Browning, who knew Chauvin well, agreed he would have been the point person for Thursday’s ceremony.

“If it had been anybody else, Spencer’s the guy we would have been coordinating with,” Browning said, adding Chauvin was a frequent honor guard volunteer. “The most important thing is that those killed in the line of duty are given the attention, respect and honor they deserve and to make sure the family’s wishes are honored.”

Browning said his office was there to lend guidance and offer suggestions, but let St. John take the lead.

“By the time I got there, they already had the machine rolling,” Browning said.

With ladders from Zachary and Livingston Parish waving a giant American flag outside Thursday morning and afternoon, Chauvin’s body lay in state inside the St. John Parish Community Center. Throughout the day, hundreds of mourners made their way past the casket to pay their final respects, including representatives from police and fire units near and far, many of whom were decked out in their finest dress uniforms.

Members of Pipes and Drums of New Orleans played ‘Amazing Grace’ as the casket was carried from the Community Center to the fire truck.

The gear Chauvin was wearing Sunday morning — his unwashed jacket, helmet, boots and tools — were on display on one side of the casket; a ceremonial firefighter’s helmet was on the other.

Constantly watching over Chauvin were a pair of sentries, one holding a fireman’s ax, the other holding a pike pole.

The services at the Community Center ended with the traditional bell ceremony, signifying the end of Chauvin’s watch and the playing of bagpipes.

“He specifically said that he wanted bagpipes to play at his funeral,” Wale said. “We made sure we got him bagpipes.”

Indeed, a group of a dozen members of Pipes and Drums of New Orleans played “Amazing Grace” as Chauvin’s casket was carried from the Community Center to the fire truck, spit polished and draped in black bunting, that would carry him to Edgard for a funeral Mass and burial in the church cemetery.

A miles-long procession of fire trucks and emergency vehicles followed along Airline Highway while hundreds, if not thousands, of residents paid their respects at one point or another Thursday.

“To me, that’s the icing on the cake,” Browning said. “The people of St. John Parish epitomized what it means to support a hero.”

Browning said Chauvin was one of St. John’s finest.

“I knew Spencer well,” Browning said. “I can honestly say he was one of the best firefighters in St. John.”

LaPlace’s Arthur Dixon sits along U.S. 51 as a procession in honor of Spencer Chauvin passes.

Daniel Perret, another colleague and lifelong friend of Chauvin, said the two grew up together, were junior firemen together and joined the department together.

Perret is among the many who have talked about how selfless and helpful Chauvin was.

“He was always the first to volunteer,” Perret said recently through tears. “When the local 4-H lady called, he said we’d go. That’s how I met my wife.”

When Perret and his wife Kelly married, Chauvin arranged for his friend’s bride to arrive on a fire truck.

“Everything he did, he did it over the top,” Perret said.

LAPLACE — On the day St. John the Baptist Parish residents and the state of Louisiana laid to rest St.... read more