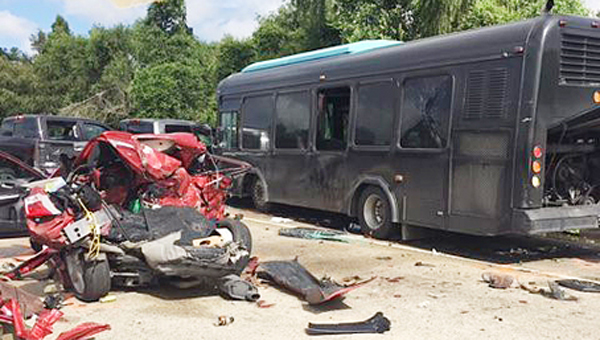 According to authorities, Kelly’s death results in an additional charge of negligent homicide for bus driver and illegal alien Denis Amaya Rodriguez.

Rodriguez began the week held in St. John the Baptist Parish under a bond exceeding $1 million.

Authorities stressed those charges would only mount in the days and weeks ahead.

State Police also announced this week the Federal Motor Carrier Safety Administration is assuming the lead role in the investigation surrounding the bus company as authorities gather details pertaining to the events leading up to the fatal crash.

State Police are joined by Homeland Security Investigations of the U.S. Immigration and Customs Enforcement because authorities determined Rodriguez is an illegal alien from Honduras who does not have a driver’s license.

Sunday’s deadly crash began when authorities responded to Interstate 10 near LaPlace to a single-vehicle wreck involving a Nissan Titan that struck two guardrails and came to rest across the right lane and right shoulder at approximately 6:40 a.m.

At approximately 7:11 a.m., State Police said, a bus driven by Rodriguez approached the crash scene at a high rate of speed before striking a fire truck, then a Toyota Camry, pushing the Camry into the rear of a Chevrolet Silverado and flatbed trailer.

The bus then veered between a trooper’s unit and the Titan before striking three firefighters standing near the guardrail, throwing each over the edge of the elevated interstate into the water below, more than 30 feet down.

Chauvin, one of the firefighters, was pronounced dead at a St. John hospital.

Jermaine Starr, 21, a rear seat passenger in the Camry was pronounced dead on the scene.

According to news reports, Rodriguez claimed the bus’ brakes failed in some fashion, leading to the deadly wreck.

Kristina’s Transportation Party Bus out of Jefferson owns the bus involved in the wreck, and a combination of state and federal agencies are sorting out who rented it, coordinated the occupants inside and played a part in promising those riders paid jobs in Baton Rouge-area flood recovery.

LAPLACE — There were no reports of damaged homes in St. John the Baptist Parish during last month’s devastating floods,... read more