ALL AGES WELCOME: St. John 4-H has more than animals to offer 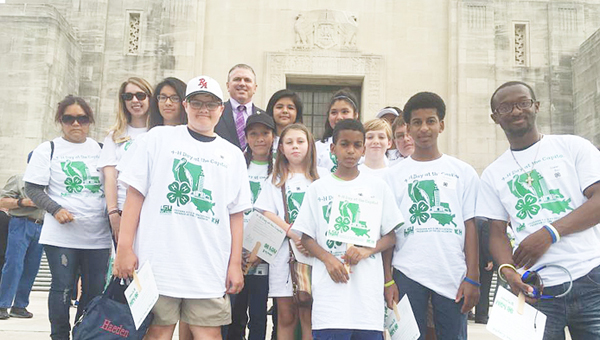 EDGARD — When most people think of the 4-H Club, visions of cows, pigs and farms might come to mind.

For generations of school children, that’s what the weekly or monthly meetings were all about.

“A lot of kids think it’s about agriculture and goats,” said Clifton, who has overseen the Parish 4-H program for a decade.

“We really teach them how to be leaders. There are a lot of great programs for the kids to get involved with.”

The 4-H — Head, Heart, Hands and Health — is a youth development organization whose mission is to help children in grades fourth through 12th reach their fullest potential by paring them with programs and mentors.

While there still are programs for the future farmers of the world, the 4-H of the 21st Century includes a wide variety of offerings designed to challenge and excite school children.

They start with club meetings at their schools, but there also will be a 4-H Night with the Pelicans, where kids will sit together for a Pelicans NBA game and will be invited onto the court at halftime for activities and to shoot with the players.

There will be a 4-H Day with the Tigers, where attendees will attend an LSU football game and be allowed to go on the field at halftime.

There’s also a 4-H Day at the Capitol, where members can meet their senators and representatives.

In addition, there are a variety of camps and conferences for members to attend as well. Among the most popular, Clifton said, is the 4-H University, where 13- to 19-year-olds go to LSU, live in the dorms and compete in a variety of contests, educational programs and activities.

“When I tell them about that, they get very excited,” Clifton said.

East St. John High junior Coy Vedol has been a 4-H member since he was a fourth grader at Garyville-Mt. Airy Magnet School. Now he is a junior leader and vice president of the East St. John club.

“My initial interest in joining was just to get out of class when I was in fourth grade,” Vedol said. “Then it became something that I really liked to do. It’s not just about agriculture. There are all kinds of different programs. You learn lots of things about the community.”

One of the many projects he worked on was a flood diversion project for St. John Parish, during which he and fellow members designed a safe house for local first responders.

Of course, there still are those traditional programs, such as the Broiler Project, where members spend six weeks raising, feeding and showing live chickens; the District Livestock Show held annually in Covington and the State Show held in Gonzales. That’s where members get to show off their prize pigs, goats and cows.

With the new school year comes a new enrollment session. Clifton and her team are making their way to all of the schools in the area to sign up new members and spread the word about the club. Annual dues are set by the individual schools, but usually are $5 or less.