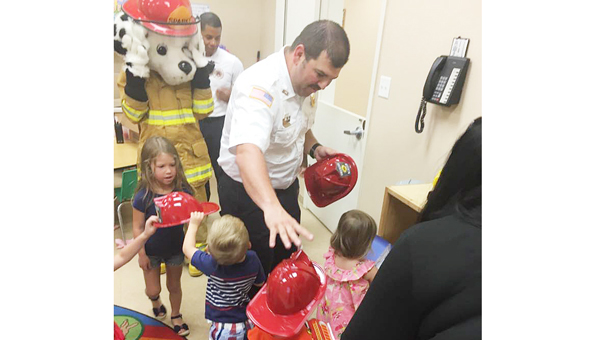 Spencer Chauvin was ‘most helpful person I’ve ever known’

LAPLACE — Perhaps Spencer Chauvin didn’t grow up wanting to be a firefighter, but it certainly seemed to be his destiny.

His grandfather, Louis Tassin, and his father, Ivy “Sonny” Chauvin Jr., were volunteer firemen in Edgard. According to Chauvin’s aunt, Wendy Landry, Chauvin just wanted to do something to help people.

“He was the kindest, most generous, most helpful person I’ve ever known,” Landry said. “It didn’t matter who you were or what you did, he would always do his best to help.”

Chauvin, 36, the St. John the Baptist Parish District Fire Chief, was killed Sunday morning when he and two other firefighters were struck by a bus that plowed into the scene of an earlier crash on the elevated portion of Interstate 10 near LaPlace. William “Mack” Beale, 35, of Gonzales was treated and released from a local hospital. Nicholas Saale, 32, of Pontchatoula received critical injuries and remains hospitalized at University Hospital in New Orleans.

A visitation and memorial service with full fire honors will be held from 8:30 to 11 a.m. Thursday at the St. John Parish Community Center, located at 2900 U.S. 51 in LaPlace. A procession will leave at 1 p.m. to escort Chauvin to St. John the Baptist Catholic Church for a funeral Mass. Burial will follow in the church grounds.

St. John the Baptist Parish deputies and firefighters salute the late Spencer Chauvin from the Belle Terre overpass Monday as he is escorted from New Orleans to St. James Parish.

St. John officials say Chauvin’s death is a huge loss, personally and professionally. The community of LaPlace, meanwhile, is mourning the loss of a husband, father and friend.

“There are no words to describe Spencer,” St. John Fire Chief of Operations Cain Dufrene said of his friend. “The only thing I can say is he strived every day to make this department better. He was always working to do things a better way.”

Chauvin leaves behind his wife, Jennifer, with whom he just celebrated their tenth anniversary in July, and two young children. He is also survived by his parents, Donna and Ivy “Sonny” Chauvin, sister Brittany Borne and brothers Jeremy and Lance Chauvin, who also are firefighters.

Landry said Chauvin grew up in and around firehouses and fire trucks thanks to this father and grandfather.

“He would always be around the firemen with his dad and my dad,” Landry said. “I guess that’s what got him interested. He was so proud of the fire trucks. He always made sure they were kept clean and everything.”

After working several years as an emergency medical technician for Acadian Ambulance and for the St. John Fire Department, Chauvin went back to school to earn a degree in Fire Science and became a paid firefighter when the Parish began the department in 2004. He was named District Chief in 2006. His job was to supervise the firefighters on a shift, with 24 hours on then 48 hours off.

Chauvin was one of the first responders to the fire at East St. John Elementary School last year. He also was among the many who helped rescue residents from the floodwaters following Hurricane Isaac in 2012 and even put out a fire in the flood.

“The sudden and tragic loss of Chauvin is the type of loss that impacts the souls of our entire community family,” Dinvaut said in a released statement. “Spencer was a dedicated public servant, widely known and respected for his bravery in times of tragedy and steady leadership in times of disaster. His tremendous commitment and service to St. John the Baptist Parish is worthy of commendation and praise — Chief Spencer Chauvin answered the call on August 28, 2016 and paid the ultimate price.”

As news of Chauvin’s death spread throughout Sunday afternoon, friends and family members shared or changed their profile photos to one honoring Chauvin with a fire-rescue shield and the words “Life’s too short. RIP Spencer.”

“He touched so many lives,” Landry said. “His touch was very far-reaching. He was a wonderful husband and a fantastic daddy. He was very attentive to his kids, taking them to the zoo and the aquarium. He was always at family functions. But if somebody needed help, he would go. I guess I can say he died as he lived, helping people.”

Said Dufrene: “I think it’s what he lived for and that’s what he was doing on his last day. He loved being in that role to help people.”

A fund has been established to assist the family. Donations may be made in Spencer Chauvin’s name at any Capital One bank location.