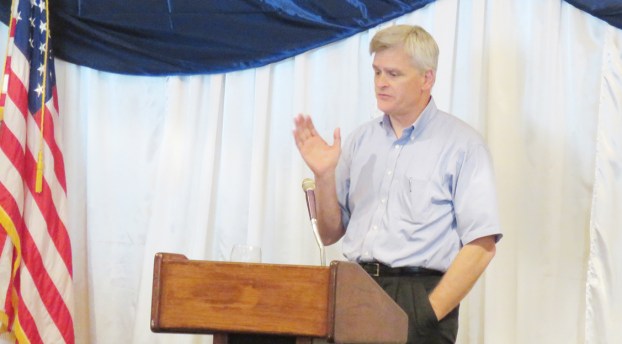 LAPLACE — As the Baton Rouge area begins its recovery from the recent devastating flooding, U.S. Senator Bill Cassidy came to LaPlace Thursday and singled out the area as a sign of hope.

“What you experienced in previous hurricanes, the capital region, Younsgville and further east are experiencing now, and the devastation is as complete as what you experienced,” Cassidy said, referring to Hurricane Isaac, which struck the area four years ago this month.

“It is a positive to come to this parish,” he said. “You rebuilt. Your businesses are back. In a sense, you give an example of what should be done. You give hope.”

Cassidy went on to salute the Cajun Navy brigade of citizen rescuers before touching on a variety of subjects as the guest speaker at Thursday’s general membership meeting of the River Region Chamber of Commerce held at the LaPlace Quality Inn.

The Senator from Baton Rouge spoke about government aid for victims, recovery efforts, the future of jobs in the River Region, health care and his proposed alternative to the Affordable Care Act — the Mental Health Act — he is working on to address the rampant drug addition in the country and concern about the spread of Zika.

He also was asked by local leaders about proposed new EPA restrictions on greenhouse emissions, the long-proposed I-10 connector and the dredging of the mouth of the Mississippi River to accommodate larger vessels.

Cassidy specifically asked the local Chamber to help spread the word that there is help available to business owners likely to see a decrease in income due to the disruption in the flooded areas. The Small Business Administration can help those businesses, he said.

“If you can document that, they can help you with that,” he said. “Please get the word out as a conduit to others.”

Cassidy then turned his attention to several bills he is trying to push through Congress, both with bipartisan support.

“Because the only way we can get it through is if it’s bipartisan,” he said.

One is the Mental Health Reform Act of 2016, which he said is designed to increase access to mental health care.

The other is Cassidy’s commitment to repeal ObamaCare, which he said is “unsustainable,” and replace it with what he called The World’s Greatest Health Care Plan. Unlike ObamaCare, which requires enrollment, Cassidy’s plan would be automatically inclusive unless an individual opts out.

“We’ll have to see how this plays out,” he said.

Those proposals, Nosacka said, could delay or cancel several multi-billion dollar projects that could bring much-needed jobs to the area as well as increase the tax base.

“Whatever you can do to rein in a runaway EPA, we’d be grateful,” Nosacka said.

Cassidy explained the new EPA proposal would replace a previous one that was not completely complied with.

“The issue is health,” he said. “My point is, the major determinant of ill health is poverty. If you drive our industry elsewhere, I’m going to invest here not there because of a regulatory regime that is hard to comply with, you increase poverty. That’s when people really get sick.”

Cassidy acknowledged the dangers and global effects of greenhouse emissions, but recognized the difficulties such regulations can cause for businesses and communities.

Roy Quezaire, the deputy director of the Port of South Louisiana, asked Cassidy to push for the long-planned and much-discussed I-10 Connector project which, he said, would improve commerce and emergency evacuation. The proposal would build a 3-mile alternative route to LA 1.

Port Director Paul Aucoin asked Cassidy to continue his support for the Army Corps of Engineers’ to dredge the mouth of the Mississippi River.

LAPLACE — Deputy Darlinta Garrison is daring to make a difference in the lives of young people across St. John... read more