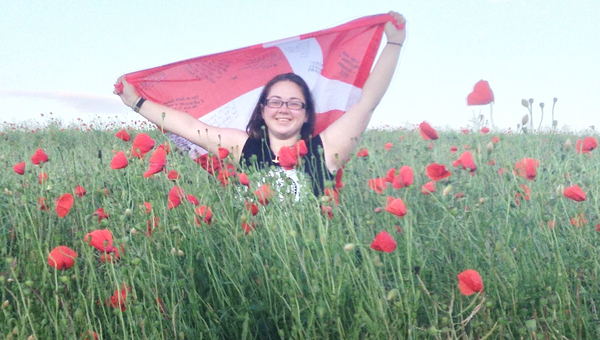 Dana Watson stands with the Danish flag in one of the many poppy fields in Denmark. The St. Charles Catholic graduate recently completed an 11-month education and life adventure in the European country.

LAPLACE — By her own admission, Dana Watson is about the last person one would expect to pack up for a year and go to a foreign country, where she knows no one and doesn’t speak the language.

But Watson, who grew up in LaPlace, did just that.

She left shortly after her 2015 graduation from St. Charles Catholic High School and spent 11 months in Denmark, living, going to school and making friends from all over the world as part of the Rotary Youth Exchange.

Now she is in Michigan, readjusting to American life (and food) as she starts her freshman year at North Central Michigan College.

It all started on a whim. While attending a Rotary Youth Leadership Awards (RYLA) banquet, Watson listened as a guest speaker talked about the foreign exchange program. Since 1929 Rotary clubs across the nation have sponsored secondary students’ trips abroad, where they can spend up to a year living with host families, attending school, learning new languages and broadening their horizons. Rotary exchange students are often recognized by their blazers, which signify their status and which often are covered in pins exchanged with fellow students from around the world.

During her tour through Europe, Dana Watson takes a picture at the Palace at Versailles outside of Paris.

Although Watson really had no urge to travel just yet, she decided to apply.

“I thought about it and I said, ‘Oh, why the heck not?’” Watson said. “I thought I should apply just to see if I could get in. I think I surprised everybody. My parents figured, ‘Oh, she’ll just forget all about it.’”

Watson was accepted to the program.

“I’m probably the last person anyone thought would do this,” she said. “I’m definitely an introvert.”

She was not entirely brave, either.

Watson was sponsored by the Rotary Club of Metairie Sunrise, representing District 6840, which includes LaPlace and much of south Louisiana. The LaPlace Rotary Club is eligible to sponsor a student as well as to host one, according to President Harry Glidden.

“We’ve looked at it, we’ve considered it,” he said. “It’s something we have not done but could do in the future. Our district normally sends about five or six students per year. The St. Charles Parish club is hosting a young lady this year.”

Part of the problem with that, Glidden said, is finding three families who will commit to hosting, all in the same public school district or at a private school that is tuition free.

For 11 months, Watson lived with a series of three host families in Denmark. She attended school and Danish classes three times per week. Students pay an up-front fee, which includes flight, housing, insurance, visa fees and an allowance.

She said the first night, spent at her Danish counselor’s home in Denmark (every student is appointed a counselor to look out for them) was the scariest.

“It was the first time I heard someone speaking in a normal conversation in Danish,” she said. “I just totally freaked out. I just kept thinking, ‘What have I done? How am I going to get through this?’”

Eventually, Watson calmed herself and learned to embrace the situation.

“I just told myself I had to see where this goes,” she said. “It all worked out great.”

Now, 11 months later, she exudes confidence and can’t contain her excitement over the adventure of a lifetime.

“It changed me in a very positive way,” she said. “I’m much more outgoing, more adventurous. I’ve been told I’ve now caught the travel bug. I want to travel more. I now have friends all over the world.”

Before her year abroad, Watson had plans to become a nurse. Now, she said, she wants to study international relations and pursue a career that will involve a lot of travel. Before returning to the U.S., Watson and her fellow exchange students took an 18-day European tour of eight countries.

“I’m so glad I went,” she said. “My advice to anyone who has even an idea in their head that they might want to do it is, just do it. Try it. You won’t regret it.”