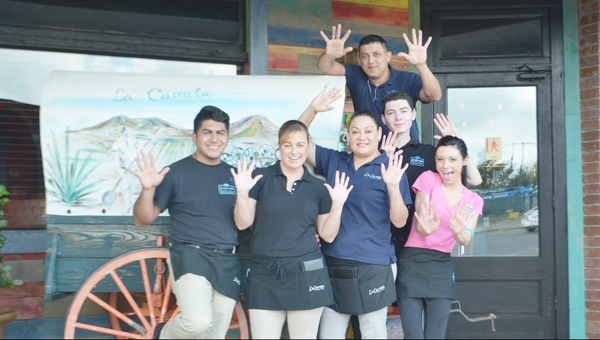 LaPlace La Carreta co-owner Alan Menjivar began working in the restaurant’s Hammond location, starting as a dishwasher before working his was up through the wait staff and management before coming to St. John the Baptist Parish.

Menjivar, from Honduras, began working at the original La Carreta in Hammond while his wife was already on staff as a waitress.

Menjivar was told there wasn’t a waiter’s position available, but there was a need for a dishwasher. He thought it was temporary, but the assignment lasted six months before a move to bus boy was approved.

La Carreta founder Saul Rubio saw something special in Menjivar as he watched the young man transition to waiter and assistant manager.

When the opportunity to open a location in LaPlace came, Rubio knew there were good people to run it.

Menjivar said he is grateful for the opportunity Rubio provided and his hands-off approach to Menjivar’s management style.

As for why the business has been a success for all these years, Menjivar said Rubio-owned tequila Don Saul, used specifically for margaritas, set La Carreta’s spirits apart from local and regional competitors.

“Our restaurant has been doing great, and the most important thing is the family that manages the restaurant and who are partners with me,” he said. “Alan (Menjivar) and his wife live here and their kids go to school in LaPlace. They are part of the community now. They know the customers by name and know the people who come three and four times a week.”

Rubio opened the first La Carreta in 1998 in downtown Hammond, adding they quickly had customers from LaPlace who wanted their own location.

Today there are 11 restaurants under the La Carreta name Rubio founded.

Rubio credited former St. John the Baptist Parish President Nickie Monica for helping the restaurant find a LaPlace location and navigate through the permitting process. From there, hospitality took over.

“The most important thing for me, as a Mexican, is when you invite somebody to your home, you open the fridge and say everything there is for you, feel free to whatever you want,” Rubio said. “When we have a party, we don’t say it’s from 3 to 6 p.m.; we say leave anytime. (In the restaurant,) it’s very important for us to have different varieties and flavors. We want people of all ages to come to the restaurant and enjoy the atmosphere.”

Rubio was inspired to open his own business after the owner of the first restaurant he worked for told him there were no promotion opportunities available for non-family members, forcing him to create his own plan. Today, Rubio said, his business partners have become his family members.

“Everybody is looking for a better lifestyle and wants opportunity,” he said.

Local food and drink fans can join in on La Carreta’s celebration by visiting the restaurant at 107 Carrollwood Drive in LaPlace. La Carreta is open seven days a week and offers many food and drink specials.

Keller: Use prayer to speak from heart

Whenever people have problems, they always turn to prayer. The problem is that most people don’t know how to pray.... read more