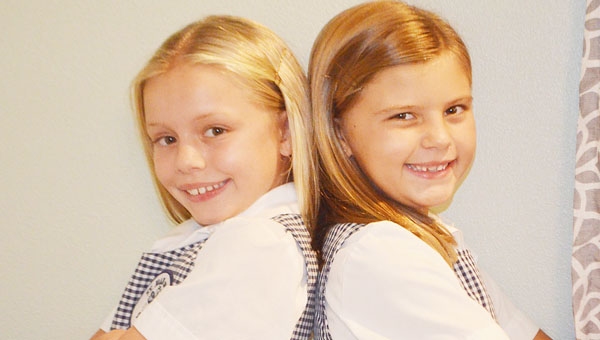 LAPLACE — Nine-year-old Faith Williams recently went shopping with her mom to buy loom bracelet materials when her mother said she wanted to wear a black and blue one in honor of police officers.

Faith Williams and Hartley Faucheux present a check for $1,203.06 to Sheriff Mike Tregre for the SJSO bulletproof vest fund.

Faith, a fourth grader at St. Joan of Arc Catholic School in LaPlace, thought maybe she could make and sell black and blue versions of the bracelets to raise money for local deputies.

She went to good friend Hartley Faucheux’s house that night to talk about the plan.

“That is when we decided not to sell them but donate them,” Faith said.

Community safety in the wake of the police shootings in Baton Rouge is on the minds of many, especially Hartley and Faith.

Hartley lives with her parents in Riverland Estates in LaPlace.

After making a few bracelets, the girls asked Hartley’s father, Steven Faucheux, if he could help promote the idea on social media.

He suggested going door-to-door in the neighborhood offering the bracelets in return for a donation to the St. John the Baptist Parish Sheriff’s Office bulletproof vest fund.

Faith and Hartley were astounded by the initial results because they doubled their goal of raising $20 in a matter of minutes.

The idea took off from there, with the girls working multiple nights making more wristbands and their parents buying the supplies from whatever stores had them available.

“Instead of playing on iPads, they made bracelets,” Steven said.

“This wasn’t just an hour or two. They spent hours on this during their last week of summer vacation from a Friday through a Thursday.”

Hartley, 8, said she is very happy with the results.

“I like that we are helping the police officers that need vests when they are getting or arresting people that have a gun and know the vests will help protect them from bullets getting to them,” the St. Joan of Arc fourth grader said.

The girls capped off their fundraising effort by presenting St. John Sheriff Mike Tregre the money Thursday, complete with a ceremonial big check.

Tregre said he had no clue the donation was coming, having just known Steven Faucheux and the girls requested a meeting with him.

“It was awesome,” he said. “$1,000 plus they raised from knocking on doors. I was really surprised when they came to the office with that big old cardboard check.  You don’t get too many kids doing things like that. It’s extra special.”