Looks Bright: Laurent finds inspiration from pool to teach others 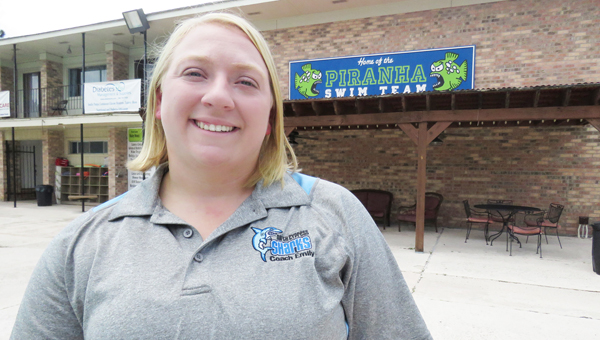 LAPLACE — With her two older daughters already enrolled in summer swim team at Belle Terre Country Club, Claire Laurent had no choice but to tote her fair-haired toddler, Emily, along.

“What else was she supposed to do with me?” Emily said.

What Claire didn’t know at the time was that she was unintentionally setting her daughter on a future career path.

Emily took lessons, learned to swim and joined the swim team. As she got older, she would lifeguard and teach some of the younger kids.

Along the way, not only was a love for swimming born but also a love for coaching.

Now 22 years old, Emily is a junior at Southeastern Louisiana University, working towards a degree in Health and Physical Education.

On a whim, she called a Hammond area fitness club that fields a swim team to ask if they needed help.

Having never coached a team solo before, Laurent balked — for a moment.

Despite her initial reluctance and nerves, Emily said it went extremely well.

“It was one of the best summers I’ve ever had,” she said. “I was so nervous at first I was freaking out. After the first couple of practices, I was like, ‘You know, I can do this.’”

Now, Emily says she doesn’t want to do anything else.

“I really want to coach swimming,” she said. “I’d love to teach at a school and coach a team or even start up a team.”

Emily said the kids she coached at North Cypress had fun and the parents complimented her.

“They were telling me they had never been taught like this before,” she said. “I was like, ‘This is important stuff you need to know.’ I just want to foster the kids to want to come back and bring their friends. Most of them don’t go year round; they just do summer.”

Emily did so well, in fact, she has been asked to coach a team of year-round swimmers who work out at Southeastern.

Laurent said she traces her love of the sport and her yearning to be a coach back to her days as a little Piranah at Belle Terre.

“It really was born here,” she said. “We always had a bunch of different coaches and everyone was different. I learned a lot from each of them.”

One of those was current Belle Terre head coach Haley Montz.

“She was always willing to help out with the little kids,” Montz said. “She’s been around the pool practically her whole life. She’s certainly capable of being a good coach.”

“One of the stories my parents will tell is that, the first couple of swim meets I would take two little strokes then have to empty my goggles, then I’d put them back on and take a couple more strokes,” Emily said.

Another time, swim meet organizers were ready to start a second heat of swimmers when Claire realized her daughter was still swimming hers.