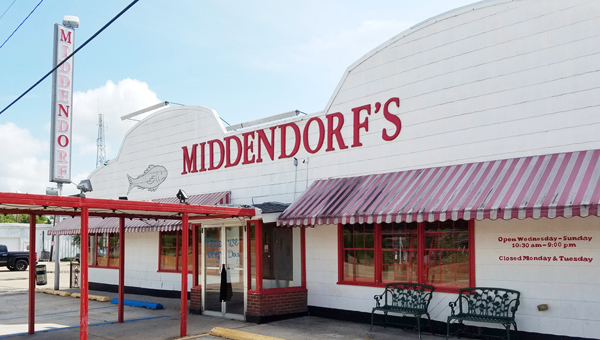 MANCHAC — Middendorf’s Restaurant in Manchac has flooded three times within the past ten years, and co-owner Horst Pfeifer said he doesn’t want to go through that again.

According to Pfeifer, Middendorf’s is raising the lower half of the restaurant to combat future floodwaters beginning this month to ensure dining rooms stay high and dry.

The project is expected to take four to five months to complete.

The last time the lower half of the restaurant was renovated was in 1967 when a private dining room was added plus walk-in coolers. In 1948, the restaurant had to be completely rebuilt due to a fire.

After 82 years of flooding numerous times, the famed “Home of the World Famous Original Thin Fried Catfish” is undergoing its next renovations.

The flood-prevention efforts began in 2002 with the building of the first flood wall. In 2008 and 2009, the restaurant added a high and dry kitchen with air conditioning — the first a/c in the kitchen since the restaurant’s opening in 1934.

After years of extensive planning and work, owners Horst and Karen Pfeifer are looking forward to the 2016 project and lessening their worries when the big storms come.

“We will preserve the old charm of the dining rooms by recycling and using the old cypress and panels,” Horst Pfeifer said. “It will be as inviting and nice as before, but just higher and drier.”

During renovations, Middendorf’s will maintain regular hours of 10:30 a.m. to 9 p.m. Wednesday through Sunday, plus a full menu.

The month-long celebrations of Fettuccine Frenzy in September and Oktoberfest will also go on as scheduled, as will the Eighth Annual Middendorf’s Manchac Run Nov. 12.

“We are nearing the final step of keeping the legacy of Middendorf’s going,” Horst Pfeifer said.

“We are so proud of each and every person who is a part of it.”