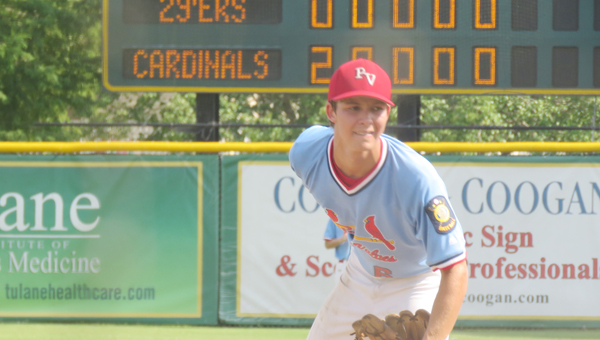 Former St. Charles Catholic pitcher Zach Roussel, shown here in action during the State Tournament, pitched seven shutout innings in Wednesday’s regional opener against Missouri. The Cardinals lost that game 3-0 then fell to Texarkana Thursday to be eliminated from competition.

LITTLE ROCK, Ark. — After cruising through the in-state competition to win the American Legion State Tournament last week, the Pedal Valves Cardinals had high hopes as they headed to the Mid-South Regional tournament in Arkansas.

Those hopes were dashed rather quickly, however, as the Cardinals dropped two games in two days and were eliminated from the tournament field.

Despite solid pitching and a deep bench, the team scored just one run in 18 innings.

The Sedalia Travelers Post 652, the state champion from Missouri, defeated Pedal Valves, 3-0, in Wednesday morning’s opener. The Cardinals then lost to Texarkana, Ark., 4-1, Thursday, ending their season at 29-8.

“We just couldn’t catch a break up here,” Cardinals coach Danny Riehm said. “It was an honor to represent Louisiana American Legion baseball at the regional level. We played hard, pitched well, played defense but just couldn’t put together any offensive momentum. At this point in the summer, you have to be able to score runs, and we just couldn’t get any rallies started.”

Zach Roussel of St. Charles Catholic got Wednesday’s start and held the Travelers off through seven innings before they broke through in the eighth with a pair of doubles.

Sedalia scored two runs in the eighth and two more in the ninth, but the Cardinals never could get the offense going. The team was held to four hits, including singles by Mason Vicknair, Justin Ory, Andrew Morrow and Darren Willis.

“Our pitching staff, as usual, gave us a chance to win both games,” Riehm said. “We just couldn’t figure out the other side of the game. It was a large park for this level, and it seemed like everything we hit hard found a glove.”

The Cardinals out hit Texarkana 8-5, but the defense sputtered a bit with three errors.

With former Rummel pitcher Conner Cosse on the mound, the Cardinals gave up one run in the bottom of the fourth inning, then tied it 1-1 in the top of the fifth. Texarkana added two unearned runs in the seventh inning.

Former Riverside outfielder Tyler Gauthier drove in the team’s lone run with a double in the fifth. He advanced to third on an error but was thrown out at home trying to score on a fielder’s choice by Jared Montz.

Thus ended Rhiem’s summer experiment — an American Legion team made up of a mixture of players from around the metro area. The team included players from Riverside Academy, St. Charles Catholic, Lutcher, Destrehan, Rummel, Thomas Jefferson and Lusher, a talented group of “cast-offs” from schools who either no longer field a traditional Legion team or who no longer allow graduated players to play.

There were only 23 American Legion teams in Louisiana this summer. Missouri had 192. Arkansas divides its players into AAA senior, AA senior and junior divisions by age.

“I’m very proud of this team and their accomplishments,” Riehm said. “To capture both the district and state championships in our inaugural season was just outstanding. These guys came ready to play each and every day. They were committed to our team goals and had a lot of energy. (They’re) good kids all around and a team that I was proud to be their coach. To win almost 30 games in a summer is a special accomplishment and says that we were a solid club.”

Gauthier was treated and released from an Arkansas hospital for dehydration; he joined his team for the long ride home.