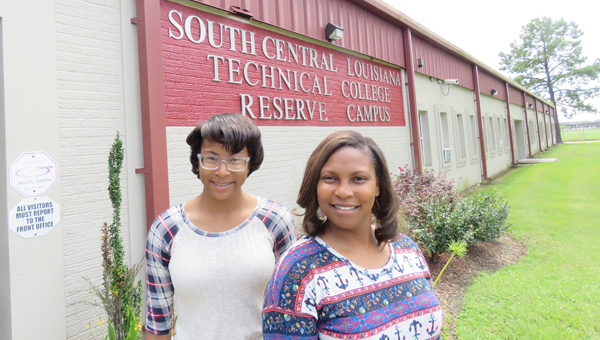 Dajon Jenkins, left, and her mother, Keisa Jenkins have enrolled for the fall semester at South Central Louisiana Technical College in Reserve. The mother-daughter duo went to the campus in 2013 to get their Graduate Equivalency Diplomas from the school. Keisa finished hers in 2014; Dajon finished in April. Now the two plan to continue their educations at the local college. (Lori Lyons/L’OBSERVATEUR)

Mother-daughter duo push each other to get diplomas at SCLTC

RESERVE — When Keisa Jenkins’ middle daughter, Dajon, enrolled in the Graduate Equivalency Program at South Central Louisiana Technical College in Reserve, she was a proud mom.

She also was a stumped mom.

“I couldn’t help her,” said Keisa, who never earned her own high school diploma. “Basically, I was like, ‘I can’t keep pushing her if I haven’t done it. I had to come back (to school) too.”

So Keisa decided to join her daughter on the path to a Graduate Equivalency Diploma. Over the next three years, the mother-daughter duo went to classes together, studied together and pushed each other.

Keisa often played the role of nagging mom, urging her daughter to stay on track. Only once did Dajon try it.

They both did what they needed to do.

“It took her a little longer, but she did it,” Keisa said. “She would get very frustrated but she didn’t stop. She pressed on. She was very determined. She wanted to learn it.”

Now both are continuing their education at the Reserve campus.

Keisa, who currently works in sales and marketing, is studying for a business degree. She hopes to eventually find a job that will cut down on her travel time while allowing her to expand her own cake business, K’s Cakes.

Dajon is studying Patient Care in hopes of becoming a medical technician.

Keisa said she didn’t have anyone push her to finish high school in her younger days.

After a couple of years of struggling and not taking her studies seriously, she simply dropped out.

“Basically, I just quit,” Keisa said. “I went on and did different things in life. I didn’t know better. It was all I knew. Then I had kids.”

When Keisa had her own children, it was different. She made sure her oldest child, Archelle, now 22, finished school. The youngest, Danae, 15, is still in school.

When Dajon came along, however, things got a little harder.

Dajon had a learning disability. Learning took extra time her teachers didn’t seem to have. She got lost in the system.

By the time she was supposed to be a senior, Keisa was told Dajon didn’t have enough credits to earn a regular diploma.

“They told me her best bet was to just get out of there and just go earn a GED,” Keisa said. “When you don’t get the extra help, you just get pushed to the side.”

After a brief enrollment in another program, Dajon enrolled in the GED program, now called Work Ready U.

The women say they took classes with a wide variety of students at the college, ranging in age from young to old.

“There was a 70-something-year old-man who had to get a GED for a certification at his work,” Keisa said.

The program allows everyone to learn at their own pace, which was good for the women.

“The math and the social studies kicked my tail,” Dajon said.

For Keisa, getting back into the swing of things was even more difficult.

“I was out of school for over 25 years,” Keisa said. “I’d tell anybody to stay in school. I didn’t know anything about anything.

“I used to be up ‘til 2 and 3 in the morning wondering how he got that answer. I’d be, like, ‘show me.’ I need to know. Break this down for me. That was my biggest thing. That’s what took me longer.”

The LaPlace women say the local technical college was a godsend.

“They work with you, they help you, they break it all down so you can understand,” Keisa said. “It’s very time-consuming, but you have to go at your own pace. .”

Added Dajon: “This was really a good place to come.”

One ran up a phone bill of over $5,000, another was arrested for breaking into a zoo after hours and... read more