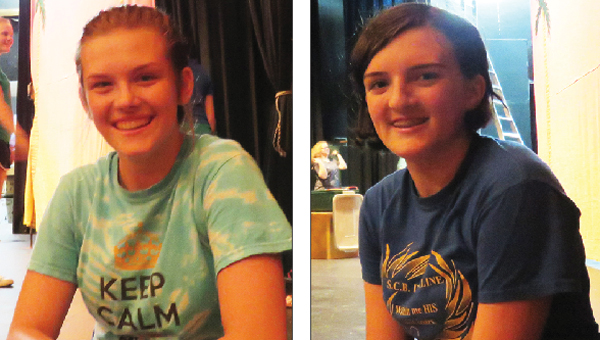 Twins Allison, left, and Margaret Powell, 12, of LaPlace have been regular members of the Missoula Children’s Theatre troupes in Reserve. (Lori Lyons/L’OBSERVATEUR)

RESERVE — For the last several months, professional actors Daniel Sukup of Nebraska and Chase Carter of Iowa have driven across the country in a little red truck packed to the roof with everything needed to put on a show.

They’ve got costumes, lights, sets, scripts and a whole bunch of props. All they need are the actors.

Those they find in towns big and small, like Reserve.

Sukup and Carter found a talented group of St. John the Baptist Parish actors this week, which will present two performances of “Aladdin” at 2:30 and 7 p.m. today at the St. John Theatre, 115 W. 4th St. in Reserve. Admission is $3.

It’s all part of the Missoula Children’s Theatre troupe’s mission to introduce theater and the arts to youngsters in communities around the world through a series of weeklong workshops for kids. In a matter of five days the team holds auditions, casts the show, teaches the parts, builds the sets, produces a pair of shows and, hopefully, plants a seed.

“The mission is to get them to enjoy the arts and build life skills,” said Carter, who will portray the Genie in today’s productions. “The show is not the end goal. It’s the process of how we got there. Did we work as a team? Did we listen and follow directions? Did we learn to read a little better? Did we build some self-confidence in our skills? That’s what’s important.”

Reserve has been a regular stop on the tour, presenting such productions as “Rapunzel,” “The Tortoise and the Hare” and “Pinocchio.”

Twins Allison and Margaret Powell, 12, of LaPlace have been regular members of the various troupes.

“I started when I was in first or second grade,” Margaret said. “As I got older, it got more and more fun. It gets you interacting with different things.”

Added Allison: “It’s not just a boring acting camp. There’s a purpose. It’s five days. Who puts on a show in five days? It is a test, but these guys are so much fun. They’re great.”

Sadie Kelly, 16, of Reserve is an assistant director for this production. She has been doing Missoula shows since the fourth grade and summer shows since her freshman year of high school.

“It’s just an amazing atmosphere,” she said. “I personally love the people here and the connection to family and, ironically, play somebody different from what I’m used to.”

Kelly said the show is great.

“You’ll see a lot of puns, a lot of laughs and a lot of chasing,” she said.

Sukup and Carter have taken turns directing and portraying the iconic Genie as they’ve crisscrossed the country. This is the last week they’ll be together as this is their final production — for now.

Sukup, who has been travelling for about five months, will continue pursuing a career as a working actor. Carter, who has been on the road more than a year, hopes to teach acting someday.

Both have a passion for what they do.

“It’s for everybody,” said Sukup, who is directing today’s performances. “The great thing is, they don’t have to have any theater experience at all. It’s literally whoever is thinking, ‘Oh this might be fun to do for a week.’ A lot of times they find out, ‘I am in love with this. I want more.’”