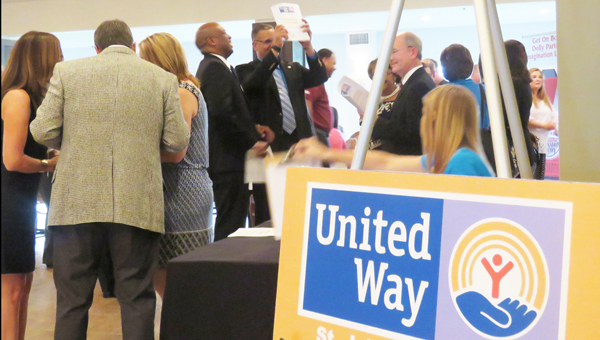 LAPLACE — For the St. John United Way, the past year has proven to be one of its most successful, as well as its most challenging.

The organization had one of its better years of generating funds, raising $1,067,303 through community contributions. That’s an increase of 50 percent from 2014-15.

Buddy Boe and Mike Tregre were honored for their contributions.

The downside is, a good portion of that was raised after a pair of community tragedies.

A fire that ripped through East St. John Elementary School in August of 2015 and a tornado that devastated portions of the community in February spurred more than $200,000 in donations to the United Way.

Still, the organization saw an increase of 20 percent in donations outside of those raised for disaster relief, fundraising campaign chairwoman Tanyia Tregre said, adding it is the fifth straight year of increases.

The figures were presented Thursday at the organization’s annual business meeting and Celebration of Success reception at Belle Terre Country Club, where the top fundraisers were recognized and awards were presented.

St. John United Way President Barry Griffin reported $650,000 of the funds raised went to support 27 various agencies and programs in the parish. More than 20,000 individuals and families, or one in four residents, received services from one or more of the programs funded during 2015.

“I’m most proud of being on a team of individuals that give so much of their time,” Griffin said. “I’ve said this before, the St. John United Way board meeting is the most efficient, dedicated board I’ve ever been a part of. Everyone has a part, everyone prepares.

“I’m just humbled to be part of such a team that has the responsibility of being the fiscal custodian of the community’s money and helping decide what’s the best way to fuel that money back into the community.”

Griffin said he was heartened by the community’s response when tragedy struck.

“We had a lot of private citizens and a lot of industries contribute to the fund,” he said. “To me, I’m most proud of being part of a community that responds to that.”

The area’s petrochemical industries and chemical plants continue to be the top fundraisers to the organization, with Marathon Petroleum leading the way. The company, located in Garyville, raised $547,946. Shell was the second-highest fundraiser with $103,724.

Tregre was most impressed, however, with the increases made by some of the companies. Turner Industries increased its fundraising 375 percent from 2014-15 to 2015-16. Mosaic increased 245 percent and Air Products increased by 140 percent.

Dwight David Eisenhower was the 34th president of the United States (1953-1961). I still remember his bumper stickers that read,... read more