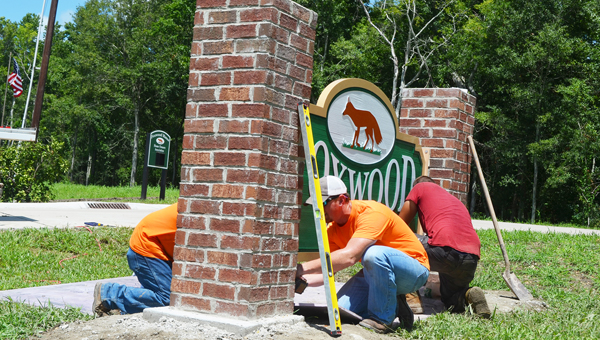 LAPLACE — Some finishing work was completed Monday on a brick-lined subdivision sign marking the entrance/exit to Foxwood Manor in LaPlace.

A new levee along the north side of Foxwood Manor helps residents in the LaPlace neighborhood avoid troubling floodwaters.

The sturdy entrance marker offers a dramatically different feel for residents who a little more than a year ago would have to fight through flood waters just to access their homes during a strong rain.

The same-way-in, same-way-out subdivision that rests off Belle Terre Boulevard near Interstate 10 has been the frequent victim of floodwaters during hurricanes and heavy rainstorms since its construction more than a decade ago.

Parish leaders and residents are confident that has changed for the better thanks to the construction of a $1.7 million Foxwood Levee Project.

District 4 Councilman Marvin Perrilloux, whose area of representation includes the subdivision, said conditions were “terrible” for residents before the levee.

“They couldn’t even get into their neighborhood with just rain and tidal flooding,” he said.

“Now, I am excited for Foxwood. It’s time they have flood protection to protect their investments, their homes.”

A seven-foot levee has been constructed to help alleviate LaPlace Plantation Canal water from backing up into the neighborhood. Parish leaders said a new pumping station is also helping clear the area and streets faster from standing water.

The entrance to Foxwood has been raised, as well, creating a safer route for residents traveling to their homes.

The new levee also helps protect the subdivisions of Sugar Ridge, New Era and The Grove.

A ceremonial ribbon cutting is planned at 10 a.m. Aug. 5 at Foxwood Manor entrance to celebrate the completion of the levee project, and Foxwood residents, community members and elected officials are invited.

Earlier this month, St. John the Baptist Parish Council members approved the project’s final change order for a decreased amount of $13,795.48, along with the certificate of substantial completion.

Designed by Shread-Kuyrkendall & Associates and funded through a Gustav/Ike Development Block Grant and funds from the 2009 Bond Issue, the project was completed to alleviate historical flooding.

Constructed by LA Contracting Enterprises, the project includes a levee with a top elevation of seven feet from the LaPlace Plantation Canal to the existing LaPlace Park Levee, a pumping station and elevated entrance to Foxwood, making it accessible and safe during rain events.

Perrilloux said Monday there are a few punch list items the contractor and public works department must complete before 100 percent completion is certified.

Besides all the rain that delayed the levee’s construction during the last 12 months, Perrilloux described the effort as a success.

“I think the residents are happy,” he said.

Perrilloux said the levee’s construction is another step in the Parish’s effort to enhance flood protection.

“The next project in my District is the LaPlace Park Levee, which is ongoing,” he said.

“We’re in the stages of the surveyors getting with the land owners to either purchase land or tell them what we’re going to do. That project is close, and, hopefully, that will come to pass, too. It would be tied into Foxwood.”