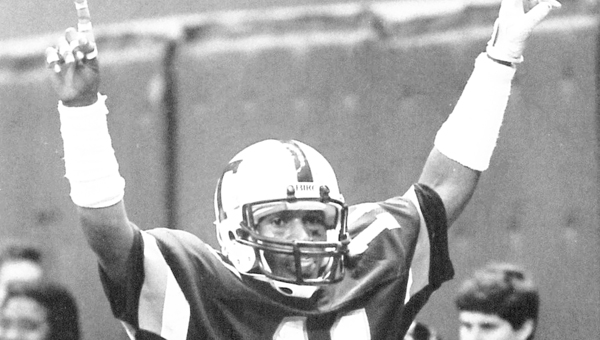 Former Lutcher High School standout wide receiver Marc Zeno, who went on to a stellar career at Tulane, will be inducted into the Allstate Sugar Bowl’s Greater New Orleans Sports Hall of Fame Aug. 6 at the Mercedes-Benz Superdome. (Photo courtesy of Sugar Bowl Hall of Fame)

NEW ORLEANS — Gramercy native and Lutcher High graduate Marc Zeno, who went on to a sterling career at Tulane University then spent several seasons in the professional ranks, will be inducted into the Allstate Sugar Bowl’s Greater New Orleans Sports Hall of Fame Aug. 6 at the Mercedes-Benz Superdome.

A group of 24 individuals and two teams will be honored at this year’s banquet, and the organization will present its annual Corbett Awards and Eddie Robinson Award.

Zeno, who now lives in Minnesota, was a much-recruited basketball player when he was a Lutcher Bulldogs.

“Football kind of came up late,” Zeno said. “I got my first recruiting letter from Loyola Marymount. I was just so excited. Then, my sophomore year, I had a great, great spring game. After that, it was all about football.”

Zeno signed to play for Tulane, where he had an incredible career. After a redshirt freshman year, Zeno started 44 consecutive regular season games from 1984-1987 and became one of the most prolific wide receivers in the school’s history with his name next to every receiving record — 236 catches, 25 touchdowns and 17 100-yard receiving games. He left Tulane as the NCAA’s all-time leading receiver with 3,725 yards.

Much of that came from the arm of fellow Lutcher product Terrence Jones, also a member of the Hall of Fame. Together they led Tulane to the 1987 Independence Bowl.

Zeno’s receiving record still stands at Tulane and is 26th in NCAA history.

“I was known as a quiet guy at Tulane,” Zeno said.

“But I always showed up on Saturdays. I probably was most known for my work ethic. I’m not a real rah-rah kind of guy.”

Former Lutcher coach Tim Detillier said Zeno was one of the best ever to be called a Bulldog.

“He was the best wide receiver I coached at the time,” said Detillier, who later coached current Miami Dolphin Jarvis Landry. “You knew he’d be playing at the next level.”

Zeno was drafted in the seventh round (182nd overall) of the 1988 draft by the Pittsburgh Steelers. He later played for the Calgary Stampeders, spent one season with the British Columbia Lions and another with the Tampa Bay Storm of the Arena Football League.

“He was an excellent athlete with a big body, sure hands,” Detillier said.

“He was definitely one of those players that, when it’s third and long you think, ‘How do I get the ball in his hands?’ I know, if I was the quarterback, I’d be looking for him.”

LAPLACE — Danny Riehm has coached a lot of summer league baseball teams, often bringing together the best and the... read more