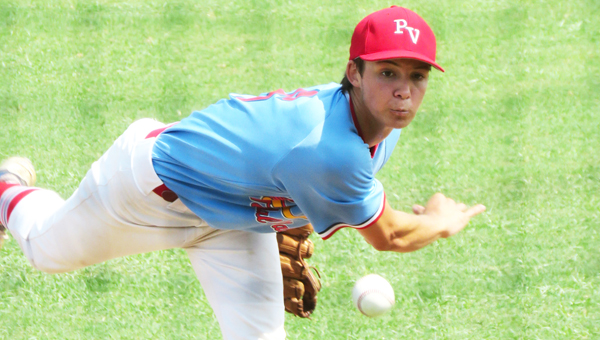 NEW ORLEANS — A lot of baseball fans thought the Pedal Valves Cardinals would be the team to beat in this year’s American Legion State Tournament. It turns out they were right.

Pedal Valves swept three contending teams in pool play to advance to the final at 4 p.m. Thursday at Kirsch-Rooney Stadium against Ponstein. If Ponstein wins, the two teams play a second ‘winner take all’ game immediately after to determine the champion. Pedal Valves only has to win once.

The Cardinals, a team made up of current and former players from Riverside Academy, St. Charles Catholic, Destrehan, Rummel, Thomas Jefferson, Grace King and Lusher, competed for the first time this summer, winning the Second District West championship to get to the state tournament.

A state win would send the team to the Mid-South Regional Aug. 3-7 in Conway, Ark. The World Series will be played in Shelby, N.C.

Pedal Valves’ first challenge was the solid team from Abbeville, the Gulf Coast 29ers. They came in boasting a redshirt freshman pitcher from Louisiana-Lafayette, Donald Comeaux.

Yet it was St. Charles Catholic graduate Zach Roussel who controlled the game and led his team to a 5-1 win. In seven innings Roussel allowed five hits and struck out eight. He also made a diving infield catch of a popped up bunt.

“He threw a lot harder than me,” Roussel said of his opponent. “In a wooden bat league, it’s all about throwing strikes and making plays on defense.”

Cardinals coach Danny Riehm said Roussel did what was expected.

“He gave us the type of performance we thought we’d get from him,” Riehm said. “He threw strikes and gave us a chance to play defense. He put some clutch pitches in key spots.”

The Cardinals also got a solo home run from Class 2A All-State Player of the Year Mason Vicknair, a rising senior at Riverside. It was his fourth home run of the summer.

It was important to get that first win, Riehm said.

“There are a lot of nerves with that first game,” Riehm said. “Nine innings, that’s a long game for kids this age, too. It changes things up a little bit. You can’t get too high or too low.”

On Sunday the Cardinals handled the Holy Cross-based Ponstein’s, 7-4, with a strong pitching performance from Riverside’s Connor Poche. He gave up three runs on four hits and one walk through seven innings, striking out three. Ponstein’s had one run on one hit in the first six innings. Poche also threw 19 first-pitch strikes.

“He was really great for us,” Riehm said. “He really gave us a chance.”

Tyler Gauthier had the hot bat in that game, with a pair of singles, a triple and two runs scored.

Finally, the Cardinals had to get past a very strong Otto Candies team from Hahnville to clinch their spot in the final. The game, originally scheduled for 7:30 p.m. Monday, did not begin until well past 10 p.m. due to numerous rain and lightning delays throughout the day and ended in the wee hours of Tuesday morning.

After allowing Otto Candies an early 1-0 lead, the Cardinals tied the game in the first then scored two runs in the fifth and two more in the sixth to take a 5-1 victory.

Now the Cardinals are sitting right where they want to be. A team will have to beat them twice.

“I tell the kids, the deeper you get into this tournament, the more important it gets,” Riehm said. “Every game is more important than the one before.”

LAPLACE — Danny Riehm has coached a lot of summer league baseball teams, often bringing together the best and the... read more