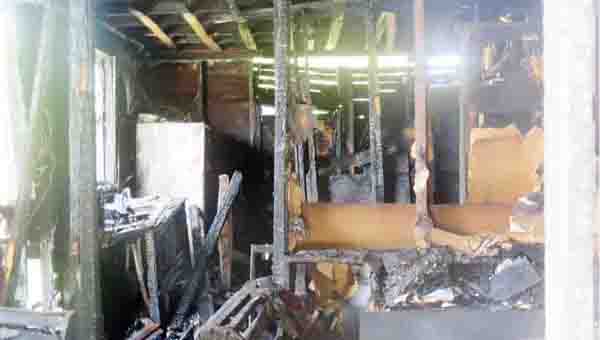 A view Monday morning inside the home of Henry Brown and David Brown on Beech Street in LaPlace shows a total loss following a fire last week. (Lori Lyons/L’OBSERVATEUR)

The Browns’ home on Beech Street was destroyed by fire.

The house, located at 1047 Beech St., was a total loss. Brothers Henry Brown and David Brown, both in their 70s, lost all of their possessions but neither was injured.

Henry’s daughter, Sairetta King, said the men were treated later that night at area hospitals for stress-related symptoms and are staying with relatives.

“We got the first call at 5:27 p.m.,” Dufrene said. “When we arrived the interior of the structure was fully involved.”

Dufrene said the cause of the fire is still under investigation but was believed to have begun in the kitchen area.

“We don’t know if it was the ice box, the stove or, electrical or, there was a window unit (air conditioner),” he said.

Family members said Henry Brown, who has cancer, was out receiving treatment at the time of the fire. David was at home.

According to King, the house was at least 100 years old and had belonged to the Browns’ parents.

The social media community quickly rallied around Henry and David Brown with offers of clothing, furniture and money.