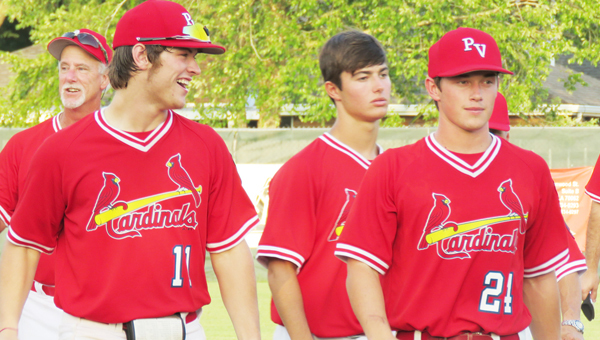 Tyler Gauthier, from left, Jacob Jensen and Justin Ory are among the many Riverside and St. Charles Catholic players who are members of the Pedal Valves Cardinals American Legion baseball team. They begin play at 3:30 p.m. today in the Legion State Tournament at Kirsch-Rooney Stadium.

LAPLACE — Danny Riehm has coached a lot of summer league baseball teams, often bringing together the best and the brightest players from across the Metro area into one dugout and blending them into one team.

This summer was a little different.

This year, Riehm put together a team of former St. Charles Catholic and Riverside Academy players, along with a couple from Destrehan and beyond to form the Pedal Valves Cardinals American Legion team

“It has been an interesting experience,” said Riehm, who has coached the New Orleans Spice senior Dizzy Dean team for many summers.

“This may have been the most enjoyable team I’ve coached,” Riehm said. “They’ve been fun to be around, they come ready to work, they’ve played hard.”

Pedal Valves, 24-6, not only won the Second District West title, the team skipped right over last week’s Regional Tournament to snag a spot in the Legion State Tournament, which begins today at Kirsch-Rooney Stadium in New Orleans.

The double-elimination tournament, with 9-inning games, runs through Wednesday, with the winner advancing to the Legion Mid-South Regional to be played Aug. 3-7 in Conway, Ark.

The World Series will be played in Shelby, N.C.

The Cardinals begin their road to Shelby at 3:30 p.m. against the Gulf Coast 29ers, an Abbeville-based team.

There are quite a few baseball fans who think Pedal Valves may have what it takes to get there, including Hahnville head coach David Baudry, whose Otto Candies American Legion team also is a contender. Pedal Valves went 1-1 against Otto Candies in league play this summer.

“They’re definitely one of the favorites,” Baudry said. “Their depth on the mound and their experience give them an edge. A lot of those kids are going on to play at the collegiate level. That says a lot about them.”

“I think we’re one of the better teams in the field,” Riehm said, but the Cardinals’ bracket draw is a tough one.

“They put us in an absolutely brutal side of the bracket,” he said. “We will have to play our best to win it.”

The good news is, Riehm has some of the area’s best players on the roster, including St. Charles Catholic graduates Dane Authement, Jacob Jensen, Zach Roussel, Justin Loupe and Delgado signee Justin Ory, along with Riverside’s Mason Vicknair, Conner Poche and Tyler Gauthier, who also is a Delgado signee.

All are contributing to the team’s success, Riehm said.

“We’re really starting to hit throughout the lineup,” he said. “That’s one of the biggest things.”

Vicknair continues to be the clutch hitter, with three home runs, two in the last three games and another off the Kirsch-Rooney wall. He said it took him a little while to adjust to the wooden bats the league uses, though.

“Early in the summer I couldn’t really figure it out,” he said. “I was popping up everything. I was swinging up. I had to learn that you have to swing down a little bit.”

Pitching, however, is usually the key to success.

Pedal Valves has a solid bullpen with lots of depth with Vicknair, Roussel, Jensen, Poche, Brett Fisackerly of Thomas Jefferson, Connor Cosse of Rummel, Charles Hereford of Lusher and Brandon Wild of Destrehan.

Roussel, who helped lead the Comets to their Class 2A runner-up finish in the spring, is expected to get the start Saturday against the 29ers.

“He can bounce back the quickest and be available to us again,” Riehm said.

Heading into the tournament, the Cardinals are looking to keep their summer going.

“It’s been a great experience, just playing with kids from other schools and playing with old friends from years ago that I played with on travel teams,” Vicknair said.

“We have great team chemistry. Coaches talk about that a lot. I just love playing the game. There’s nothing else I’d rather be doing.”