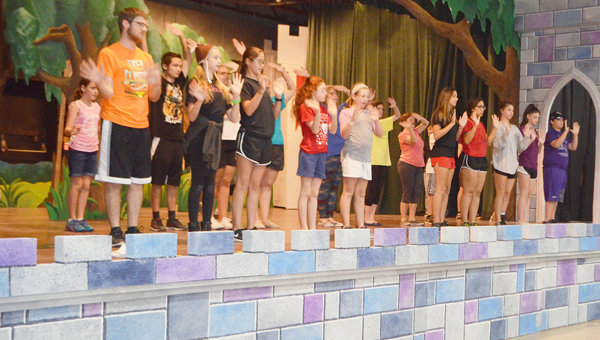 RESERVE — Look past the spectacle of an ogre, spunky princess, wise-cracking donkey and playful musical accompaniment, and many see a pretty relevant main theme with “Shrek: The Musical.”

During rehearsal last week at St. Peter Catholic School, Fiona, played by Abbie Shull, is separated by Tyler Palermo, who is playing Donkey, from getting into a serious argument with Shrek, played by Jeremy Guidry. (Stephen Hemelt/L’OBSERVATEUR)

“I’m really excited about the message of the show of accepting who you are and seeing value in everyone in the world,” Darryl P. Clement said. “In this day and age of people not getting along with each other based on their differences, this message is needed.”

After a multi-year hiatus, “Shrek: The Musical” marks the second year in a row St. James Community Theater has teamed with St. Peter School for a summer production. 2015’s “The Addams Family” was hugely successful, theater leaders said, selling out its entire last weekend.

The production is capitalizing on that success, utilizing the gymnasium this year as a scene shop to build sets. The school also sells concessions as a way of raising funds, and, this year, is hosting a pre-theater meal from 5 to 7 p.m. Saturday.

A dinner of broiled tilapia is going to be served over angel hair pasta and creamy shrimp sauce, along with salad, bread and a dessert. Meals are available for take out ($10) or dine-in ($12). The dine-in option includes a choice of beverage. Preorders can be made at jclement@stpeterreserve.org or 985-536-4296.

“Shrek: The Musical” is a tale of an unlikely hero who finds himself on a life-changing journey alongside a wisecracking Donkey and a feisty princess who resists her rescue. Throw in a short-tempered bad guy, a cookie with an attitude and fairy tale misfits, and it creates a mess that calls for a real hero. That is where Shrek comes into play.

Clement, working his 18th year of summer musicals in Reserve, said leading a newer musical challenges him to keep the cast and crew on the same page.

“A show this complex and involved requires a high level of attention and some tedious practices,” he said. “I feel that the cast continues to step up to the bar placed in front of them”

Clement said the special effects and puppetry involved in the show, as well as the musical’s “outstanding ensemble” of “extremely talented” main characters are going to make for a great musical.

“I think the audiences will love the spectacle of the show, but also will be really excited about seeing a fresh new musical this summer,” he said.

Tickets are $15, and all seats are reserved. They are available at stjamestheater.org, Roussel’s in Gramercy on Main Street and Roussel’s in LaPlace on Belle Terre Boulevard.

Jeremy Guidry plays the musical’s title star, “Shrek,” a role he describes as fun and iconic.

“I relate to him in many different aspects,” Guidry said. “He’s quirky and has a gigantic heart that everyone can warm up to. I grew up being the ‘big’ guy and was always judged for things, so being able to bring him alive on the stage is something very special to me.”

Guidry said all audience members are going to relate to the show because of its incredible themes and quirky characters.

“What I really enjoy about Fiona is that she’s not an ordinary princess,” Shull said. “She’s got attitude. She’s got spunk. She’s quick-witted and not afraid to show it.”

She said audiences are going to see the musical has “more pizzazz” and “more heart” than the popular film.

Tyler Palermo is playing the show’s most loveable role, Donkey. The fun-loving sidekick to Shrek is always good for a laugh.

“Donkey is carefree and funny, and I have enjoyed every minute of it,” Palermo said. “The most fun part of playing Donkey is trying to make Shrek and Fiona a couple. The song ‘Make a Move,’ which is Donkey pushing Shrek to make a move on Fiona, is my favorite. This scene is hilarious and so energetic. It shows the true spirit of Donkey. I also get to act like myself, which is great.”