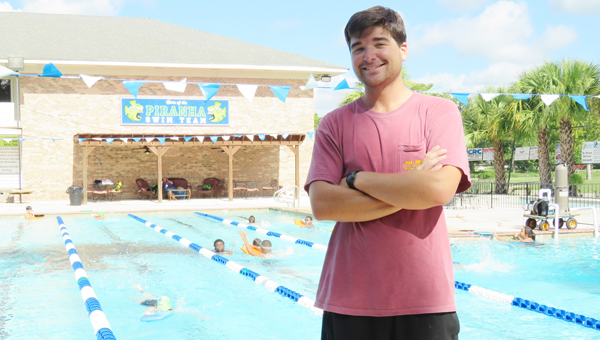 Piranha Swim Team coach Blaine Tatje, pictured this week during practice at Belle Terre Country Club, is getting his team ready to compete in its first Meet of Champions Sunday at Terrytown Country Club. (Lori Lyons/L’OBSERVATEUR)

LAPLACE — It has been an interesting summer for Blaine Tatje and the Piranha Swim Team.

After breaking away from the River Parishes to join the Jefferson Community Club Association (JCCA), everyone had a lot to learn.

Tatje said it was a great summer.

“It was just so relaxed and easy,” he said. “We definitely had a lot to learn, but everyone was so great in helping us.”

Now he and his team are gearing up for their first Meet of Champions.

Unlike the River Parishes Swim League’s finale, which winds up with a big friendly meet with all participants, this is a serious competition with 127 events for different age groups.

“Each team can only send its top two swimmers in each event,” Tatje explained. “The whole team doesn’t get to go. You have to work the whole season to qualify to make it there. So really, only about half the team gets to go.”

Actually 45 Piranahs will be competing Sunday at Terrytown Country Club in Terrytown. The 9-under competition is from 8:30 until 11:30 a.m. The 11-over competition begins at noon and should wrap up around 5 p.m.

The Lakeside Country Club Lasers have dominated the event in recent years, but Tatje and his swimmers are excited to be a part of it.

Tatje said the one to watch is Chris Hammett, 13, a year-round competitive swimmer who is capable of breaking a couple of records this weekend in the 100 meter individual medley and the 50 meter butterfly — he just doesn’t quite know that yet.

“We were like, ‘Should we tell him? Will he get nervous?’ his mom, Lakeisha Hammett, said. “He’s just the kind of kid that will do well no matter what.”

Chris said he is excited about the upcoming event.

The Hammett family also enjoyed the new league this summer.

“It was really fun because, for the past four years, I’ve been going against the same people,” he said.

Lakeisha said the competition was good for her son.

“I had friends in this league who told me it would be really good for Chris,” Lakeisha said. “They said he would have a chance to do better and swim against some really good competition. The kids were, like, ‘Mom this is really one of the great seasons we had,’ because there was no pressure. They were just here to have fun.”

It wasn’t always so, however.

Lakeisha said this was never a sport she would have picked for her son or his brother, Calix, 10. She only made Chris take lessons because his grandfather refused to take him fishing unless he learned. Then, once he started swim team, he was terrible.

“I told him there were kids who would get out of the pool, rode their bikes home and fixed a sandwich and he was still in the pool,” she said. “It spurred him to do better.”

Swimmers competing in this weekend’s Meet of Champions are:

Rams coach Lester Smith ready to retire — or maybe not

EDGARD — After more than 40 years as a teacher and coach on the West Bank of St. John the... read more