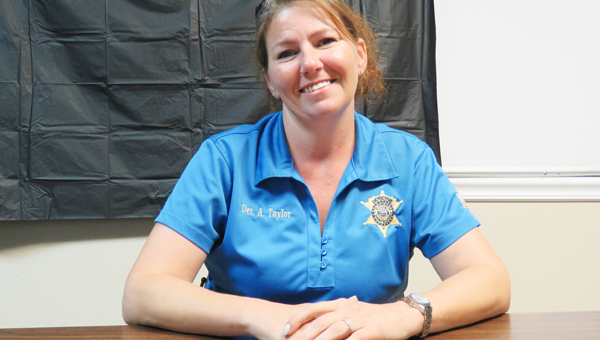 Detective Ann Taylor received a plaque after being named the Deputy of the Month by the St. John Business Association.

LAPLACE — On July 13, St. John the Baptist Parish Sheriff’s Detective Ann Taylor received a plaque after being named the Deputy of the Month by the St. John Business Association.

However, it was on the night of May 14 that she received one of her greatest rewards.

That night, Taylor was contacted by authorities from Bay Town, Texas, who were searching for a 10-year-old child who had been kidnapped by an estranged family member. The police believed the child was in the LaPlace area and desperately needed Taylor’s help.

Taylor quickly got to work, pinning down a possible location for the child in LaPlace. With the SWAT team, Taylor and her team went to the house, but they were too late.

“She had been there and we just missed her by a couple of hours,” Taylor said. “But the person at the house told us where she was. She was definitely in danger. We don’t know what the kidnapper’s intentions were, but we believe it would have been bad.”

Hours later, Taylor got word that, thanks to her work, the child had been found safe in New Orleans. Now a month later, the child has been reunited with her Texas family and Taylor has a nice certificate to put on her wall.

“It felt really great to be recognized.”

The made-for-TV like drama played out almost a year to the day after Taylor helped find another missing child, this one from LaPlace, who was found in deplorable conditions after two years in Calcasieu Parish.

“The difference here was, she was almost dead,” Taylor said. “Another week and she would have been dead.”

“She was down to 40 pounds when we found her. Today she weighs 108,” Taylor said. “She was in really bad shape. She’s awesome.”

For Taylor, a native of Kenner who lived in LaPlace until Hurricane Isaac hit, such outcomes are the true reward of her job. It just took her a little while to get there.

After years working as an emergency medic, Taylor was encouraged to become a 9-1-1 dispatcher. It was a job she loved.

“It’s where everything happens,” she said. “We called it the ‘Beehive.’”

There was just one thing.

When deputies and detectives went out on calls, she wanted to know what they were doing.

“I just wanted to know the reasons why they did things,” she said. “I was intrigued.”

So Taylor, who had been an emergency room medic for 15 years before, asked to be allowed to attend the training academy.

“He was the first in about 15 years to allow anyone from Communications to attend the Academy,” she said.

“I was the first to go and I was just so proud of that.”

She also was enlightened.

“I was adamant. I was not leaving 9-1-1. I went to the training at the St. Charles Sheriff’s Office and I just knew this is what I wanted to do. And one of the first things I did when I came out was, there was an incident where there was a body found in Garyville. I had just gotten out of the Academy and was back in 9-1-1. And I was like, ‘I want to go. I want to go.’ So I went, just to help out.”

Now it’s just more than a year later and Taylor is a decorated Detective with the Sheriff’s Office, in the Crimes Against Children Division. She also works with the Attorney General’s Office, teaches a rape defense class and gives CPR instruction to Sheriff’s deputies.

Taylor, who has two grown children of her own, a son in the Air Force and a daughter attending UNO, plus an adopted daughter who is studying Criminal Justice at Delgado, is engaged to be married in October.