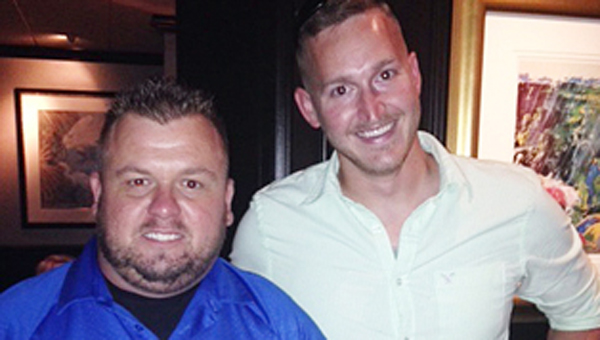 LAPLACE — Usually, the best match for a kidney patient needing a transplant is a blood relative.

Sometimes, though, a different kind of brother comes through.

Jason Triche stands in front of a picture earlier this year at his home in Montz. The picture is of a police officer protecting a child. The picture was created in memory of the two deputies, Jeremy Triche and Brandon Nielsen, who were killed Aug. 16 2012.

St. John the Baptist Parish Sheriff’s Deputy Jason Triche, who was shot and severely wounded in the line of duty in 2012, will receive a new kidney from St. Tammany Parish deputy Andre Ardeneau.

The operation, originally set for Monday, was postponed until next week due to the lack of availability of side-by-side operating rooms.

Triche was shot multiple times ambush-style in a LaPlace mobile home park in August of 2012. Deputy Michael Scott Boyington also was wounded in the shooting.

Triche has undergone more than 29 surgeries since then. He also has been enduring thrice-weekly dialysis treatments in recent months as his one remaining kidney began to fail.

In March, his sister Chasity Triche-Armstrong posted a plea on Facebook, asking for potential donors. The family got a great response from friends, family and strangers, but Triche still was waiting for a match.

“He’s been struggling,” St. John Sheriff Mike Tregre said. “I saw him (recently) and it looks like this gave him new life, new confidence. He’s ready to get it going and I’m ready for him.”

Even though they chose the same profession, Triche and Ardeneau did not know each other until a recent meeting.

Ardeneau said he was on a recent cruise with his wife when he met a fellow passenger who talked about donating a kidney to his mother-in-law. Ardeneau, who is a regular blood-donor because of his O Positive blood, was intrigued.

“He told me the process that he was going through and all that and I was like, ‘That’s very interesting,’” Ardeneau said. “It sparked my interest.”

Upon returning home, Ardeneau began further research into the process.

“I saw that it wasn’t a humongously invasive process, didn’t shorten my lifespan whatsoever, and the benefits the recipient has, as opposed to a cadaver kidney, is just phenomenal,” he said.

After three days of grueling testing, Ardeneau learned he was a potential donor. Then he found out he was a match for Triche.

“Once I found out who it was, it kind of made it a lot easier for me,” he said. “We’re around the same age. He’s just a couple of years older than me. We both have little boys that we play with. If I was in his situation, I would hope that somebody would step up to the plate and do it for me. I couldn’t think of a better person to give it to. He literally almost sacrificed his life for his community. ”

Tregre said seeing the two men come together is amazing.

“First, just to have a match has got to be an awesome feeling,” Tregre said. “To know that you’ve got somebody to give you further life. Secondly, a match from a fellow law enforcement officer — that is truly amazing. He’s a true hero and, basically, he’s getting a kidney from another hero. Both have the heart of a servant, now they share a true connection.”