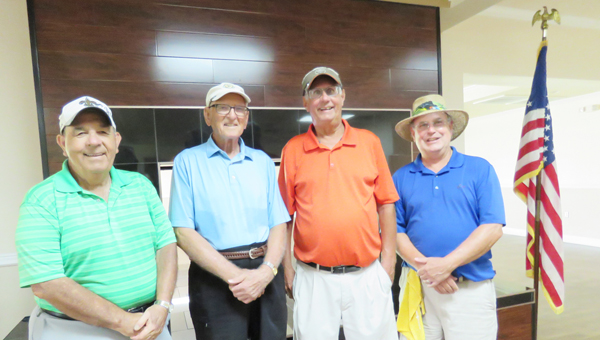 The foursome of Ray Rieger, from left, Earl Booth, Chuck Hughes and Byron Breard smiles for a picture after sharing the tale of the hole-in-one recorded by Booth July 1 at Riverlands Country Club in LaPlace. It was the second one for Booth, who is 90 years old. The four buddies golf together three to four times a week. All have recorded holes-in-one except Breard. (Lori Lyons/L’OBSERVATEUR)

LAPLACE — Earl Booth of LaPlace has seen and done a lot of things in his 90 years of living.

He’s had a successful career for an airline, a wonderful marriage and six beautiful children.

Now long retired, Booth spends a lot of his time with his buddies playing golf at Riverlands Country Club.

To top that off, he’s even achieved every golfer’s dream of hitting a hole-in-one about a decade ago.

Using a 5-iron on the 11th hole from 125 yards, Booth hit his second hole-in-one, becoming the hero of all of his friends and the envy of all other golfers.

Booth’s regular golfing buddies Ray Rieger, Byron Breard and Chuck Hughes all were there to witness the event, and all were duly impressed — even though Hughes and Rieger have recorded their own aces in the past.

Their first thought, however, was “where is the ball?”

“We stood on the tee box and watched the flight of the ball and we knew it was a real good shot,” Booth said.

Rieger said he saw it bounce on the green, then bounce again. Then he didn’t see it again.

“So we got up to the green, and I didn’t see it on the green so, the first place I went to look for it was in the hole. And sure enough, that’s where it was.”

Breard, who was Booth’s across-the-street neighbor for many years before moving to Metairie, said he is the one who gave Booth his expertise on the shot.

“I hit my ball first and it got on the green,” Breard said.

Booth, who said he plays golf three to four times a week at Riverlands, moved to the area from north of the lake in 1984 with his wife.

Not long after that, he said, his wife died of cancer.

Booth had retired after a long career with Delta Airlines, starting with its predecessor Chicago and Southern.

“I did everything,” he said. “I worked the ramps, the ticket counter, I  became a coordinator. It worked out real good. I was there 39 years.”

Booth attributes his longevity and good health to good genes. He has a sister who is 94, and another who is 87.

“The good Lord gave us good genes,” he said, adding that he is in great health overall. He does like to take an afternoon nap, though.

“The only problem that I have is the normal problem that people have with the lower back, you know. It hurts all the time.”

Said Breard: “Well, you’re only 90 years old. You’re allowed. I wish I could play as well as he does and keep up.”

Booth said he started playing golf when he was a teenager, but didn’t get really “serious” about the game until he was in his 40s.

“It gets addictive, you know,” he said.