‘Why would somebody do this to her?’ 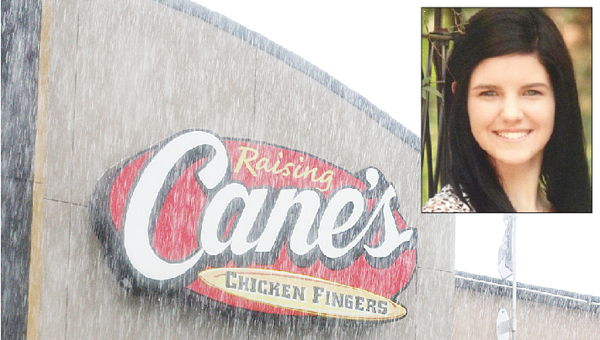 The Raising Cane’s Chicken Fingers in Kenner is seen on a rainy morning Thursday. The location was the site of a robbery and brutal stabbing Wednesday that resulted in the death of LaPlace’s Taylor Friloux, inset.

“Why would somebody do this to her, especially her of all people?” Reavis asked through tears while at Garden of Memories Funeral Home and Cemetery in Metairie. “I mean, if you’re going to rob a place, take the money and go. Why such a vicious act? I want to know if there is more to this?”

One of the stab wounds struck Friloux’s aorta, and authorities described it as the lethal blow.

Despite being brutally attacked at approximately 1:25 a.m. Wednesday, Friloux wasn’t pronounced dead until 8:41 a.m. at University Medical Center, a sign Friloux had plenty of fight in her, as well as a strong will to live.

She was also fiercely protective of her loved ones and those she was charged to look after, family and friends said, which may have led to the assault.

Friloux, a LaPlace resident, was a shift manager at Raising Cane’s Chicken Fingers in Kenner.

Following closing from Tuesday’s work day, Friloux, other employees and crew members from a carpet cleaning service were still inside the restaurant just after 1 a.m. Wednesday when she exited the location through a back door to empty the trash.

It is then, authorities said, Friloux was met by two men wearing hoodies, one also wearing a Raising Cane’s T-shirt, who demanded she let them in the restaurant.

Friloux then opened the door, through which the robbers entered and went to the restaurant’s safe before ultimately leaving with approximately $1,000.

After grabbing the cash, police said, one assailant left immediately while the other stopped over Friloux’s motionless body on the floor and stabbed her again.

The brutal nature of the attack, which family and law enforcement still have not gotten ahold of, has left many with unanswered questions.

Racism, sexism and classism have all been floated as possible motives.

“I don’t know if it is the white race or female race, he was hard to work with,” Glaser said. “Our guys are still trying to identify some type of relationship. I understand the stabbing to open the door, but you get the money and you are fleeing the store, to stop and stab someone who was motionless on her back, laying on the floor, there is something more to it.

“There is a little more hatred involved than just an armed robbery. That is another angle we’re working on, also.”

Friloux’s mother was equally puzzled when processing the need for the excess brutality.

“Why would someone have that much anger against my daughter?” she said.

Glaser said his department contacted the U.S. Attorney’s Office within the first 24 hours of the crime to suggest possible hate crime charges may be necessary.

Glaser also stressed during a press conference that the man police believe stabbed Friloux — 23-year-old Joshua Every — had quit his job at Raising Cane’s in Kenner voluntarily eight months ago. Glaser’s statement seemed to shoot down rumors that swirled in the killing’s aftermath that suggested Friloux fired Every.

Friloux is white, and Every and 24-year-old Mark Crocklen Jr., also arrested following the robbery, are black.

Friends and family of Friloux say she was a sweet and hard-working person who routinely helped her co-workers.

That was the description shared by her boyfriend, Mack Keys, who is black.

Keys, who works at Raising Cane’s in Kenner, told media outlets Every had not expressed negative opinions to him about white people and women, but added Every had a problem with authority.

The crime’s Kenner location is two parishes away from St. John the Baptist Parish, but many in the community are personally connected because the victim and first two suspects arrested lived in LaPlace.

The natural ties and close-knit nature of the River Parishes have brought hundreds together as a community full of people who knew the victim and suspects struggle to cope in the violent aftermath.

Reavis said her daughter was a very hard worker, adding “all of her friends and family have been extremely helpful during this time.”

Friloux originally worked at Raising Cane’s in LaPlace before moving to the Kenner location.

The manager at the LaPlace Raising Cane’s, who wished only to identify himself as Peter, said he was Friloux’s supervisor in LaPlace, adding it was her first job.

“She was just an awesome person, a hard worker, just awesome,” Peter said.

Julie Perrault, spokeswoman for Raising Cane’s, said the company is shocked and saddened by the tragic loss of a valued crew member.

“Our thoughts and prayers are with Taylor’s family and friends at this time, and we mourn the loss of our colleague and friend,” Perrault said.

Friloux’s family members told media members this week that the young woman recently helped open a Raising Cane’s location in Minnesota and was gearing up for a business management program to increase her chances of advancing in the company’s hierarchy.

Keys mentioned Friloux had hopes of owning her own bar.

The U.S. Marshals Service and deputies with the St. John the Baptist Parish Sheriff’s Office arrested Every Wednesday morning at his mother’s house at 168 River Oaks Drive in LaPlace.

A black Mercedes was seized from the location, as well, but police say it is not the getaway vehicle believed involved in the robbery.

Shortly after word spread of Every’s arrest in LaPlace, St. John Sheriff Mike Tregre said the second suspect, Crocklen, confessed to his father his own involvement as the crime’s getaway driver.

“His father, having a relationship with one of our officers, contacted that officer and wanted to have his son turn himself in only to that officer,” Tregre said. “Those arrangements were made, and his son came in and confessed.”

“Even though his son did this horrific crime, he knew enough between right and wrong to have his son turn himself in,” Tregre said. “He did the right thing.”

Authorities said Crocklen provided them with a complete confession, detailing the crime’s planning and execution.

According to Glaser, Crocklen said Every planned the robbery, recruited the participants and said robbery would be the group’s only purpose.

Police believe Crocklen served as the driver and Every was the man who stabbed Friloux.

The St. John the Baptist Sheriff’s Office provided information Thursday concerning a suspect vehicle that was captured on a crime camera in St. John Parish, which resembled the suspect vehicle seen fleeing Raising Cane’s on Williams Boulevard after the robbery.

That vehicle, a 2001 Toyota Highlander gold in color, was found registered to an address on Vouray Drive in Kenner.

Once at the Kenner Police Department, Donald initially confessed to being the getaway driver of the Toyota Highlander during the commission of the armed robbery, Glaser said.

Upon confronting Donald concerning inconsistencies, he then confessed to being the second person who entered Raising Cane’s with Joshua Every to commit the armed robbery, Glaser said.

Donald told detectives he was initially recruited by a female to take part in “a lick” (slang for robbery) and participated in its planning. Donald advised that he was armed with a “box cutter” while Every was armed with a knife upon entering Raising Cane’s, Glaser said.

After committing the robbery, Glaser said Donald advised that Every “stabbed that girl.” Every even returned to the vehicle telling those who occupied the getaway vehicle that he thought “he killed that girl.”

Kenner police said the investigation is active and authorities are attempting to identify others involved.

Kenner police said Donald was a previous employee of the Raising Cane’s.

The Toyota Highlander has been seized for the investigation.

From the investigation it was learned, according to Glaser, that Runner actively recruited suspects who committed the robbery at Raising Cane’s. Police said Runner was not the occupant inside the vehicle at the time of the robbery.

Kenner Police announced Friday they are attempting to identify a fifth person, a female, who was inside the vehicle.  The investigation is ongoing.

Glaser urges anyone with information concerning others responsible for the armed robbery and killing to call Detective Brad Ricke at 504-712-2214 or Crimestoppers at 504-822-1111.