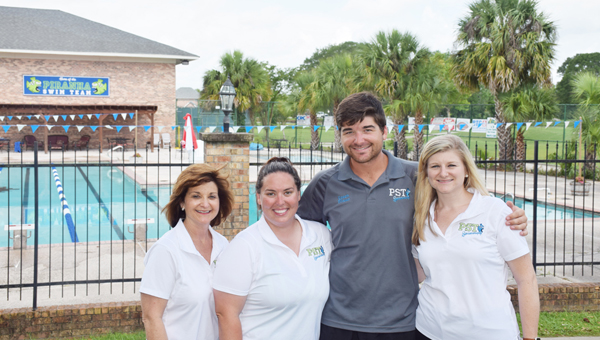 LAPLACE — Some River Parishes residents hear the Tatje name and might think of insurance, but others know the real family business is swimming.

For more than 30 years, the Piranah Swim Team has been navigating the waters of the River Parishes under the Tatje influence.

Blaine Tatje has been swimming  along since he was 5, the son of Natalie, who coached and taught the swim team at Belle Terre Country Club until she handed (some of) the reins over to her daughter, Kelsey.

When Kelsey “had to grow up and get a real job,” (according to her brother), Blaine took over.

Now Blaine and head coach Haley Montz are the ones leading the Piranahs in a new direction.

Blaine says it has been a good move.

“We’ve just turned it into a big positive,” Blaine said.

“Last year we swam outside the league, we just put together a schedule against some other teams, so we got to put our kids up against different competition. We were able to go out and swim against a lot of teams that were a lot more competitive.”

Even though this summer schedule has barely begun, it has not been without its challenges.

Blaine and Montz are learning the different ways different clubs do things.

“We’re kind of feeling our way through this season,” Blaine said. “We had our first two meets in the league and it was the second one where we really learned a lot.

“There’s a lot of strategizing in this league. This league is much more challenging for the swimmers and us as coaches. They take it a little less seriously.”

Montz, who became a Piranah seven summers ago, said the teams in the new league have been very understanding.

“Nobody makes a big deal out of it,” Montz said. “It’s not like it’s the end of the world when we do something wrong or don’t know a rule. They’re very understanding that we’re new and we’re still learning the ropes.”

Blaine has learned his way over the years, first from his mom, Natalie, then his sister, Kelsey, then an assortment of coaches.

He was a competitive swimmer in USSA then at Holy Cross High School in New Orleans. While attending LSU in Baton Rouge, Blaine coached at Crawfish Aquatics. He also coached at the Jewish Community Center in New Orleans.

“I would love to coach high school swimming one day,” Blaine said.

He became one of the leaders of the Piranahs in 2013. (Sister Kelsey still helps out, as does mom).

Blaine credits a rebranding effort after the 2012 season for a major turnaround. In 2013 everything was new, from the name to the team’s colors and uniforms.

“We just felt like it was important,” he said. “It was all so boring.”

He also credits the addition of Montz.

“I think we had a lot of coaching changes through the years,” Blaine said.

“She brought some consistency. She’s just been awesome. We’re a team. We do it all together.”

Montz said she feels like she’s giving back to the River Parishes community by teaching the youth how to swim.

“I spent as much time at the pool as I did in school,” she said.

“I feel like swimming is a life skill that everyone should learn because we live in a place that is surrounded by so much water.

“This gives me a chance to give back to the community I grew up in. Plus it’s just fun to see the little ones grow as swimmers and just as people.”

This year the team boasts more than 90 swimmers who are enjoying the new competition against a new group of teams outside of the River Parishes.

Blaine said he is happy to be carrying on the family business.

“It’s not really a business, I guess, ” Blaine said. “None of us really make any money at it. It is  just a family thing.”