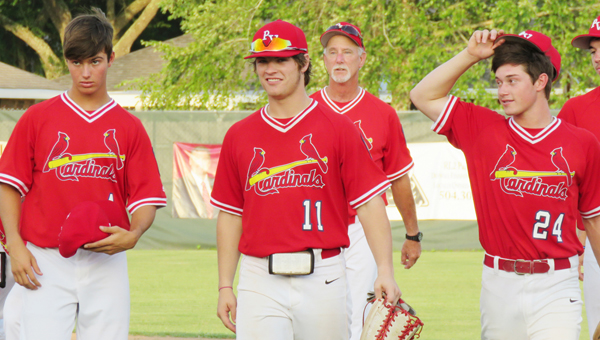 LAPLACE — On any day during the prep baseball season, Mason Vicknair would not expect to receive a hearty high five from Zach Roussel or Justin Ory after hitting a 2-run home run.

That’s because, during the prep season, Vicknair played for Riverside Academy and Roussel and Ory played for St. Charles Catholic. Everyone in the River Parishes knows how those two teams feel about each other.

The proof is in the fact that several players from both teams, along with a couple from Lutcher and Destrehan, have joined forces this summer to form the Pedal Valves Cardinals American Legion team.

Further proof is in the dugout, where former Rebels and Comets sit together, joke, tell stories and share a bag of sunflower seeds, and on the field where a Comet can congratulate a Rebel after he sends a bomb over the left field fence.

“Besides Twitter beef, it’s just the parents that don’t get along,” said Comet Justin Loupe.

Together, almost in unison in fact, they insist they really do all get along.

“It’s just competition like that while we’re playing,” Rebel Tyler Gauthier said. “It’s just that we grew up together through the years so we all know each other.”

Among the most talented players St. John the Baptist Parish had to offer, these guys have been playing together for longer than one summer. Some were together at their elementary schools; most were together on parish All-Star teams from the time they were 6. They only went their separate ways once they got to high school.

Then they were on opposite sides.

Added Roussel: “I don’t particularly like anybody I play against, to be honest.”

There was even more angst this season as the two schools were reunited in the same district, pitting them against each other four times.

Riverside, which had not defeated the Comets since 2008, finally won one this year.

The two had to share the district title with Newman. St. Charles got the last word, however, beating the Rebels 3-0 in the Class 2A semifinal game.

That only gives the players fodder for good-natured bantering.

“We joke about it,” Loupe said.

Believe it or not, the Rebels players were rooting for St. Charles the next day as the Comets took on St. Thomas Aquinas in the championship game.

“I wish they would have pulled through, honestly,” said Loupe. “I was hoping they would bring it back to the River Parishes.”

While some players’ careers may have ended that day, some Comets and Rebels became Cardinals.

Longtime coach Danny Riehm has been pondering a blended American Legion team for quite some time, but only put it together this summer.

The team is 10-2 overall and 7-1 in American Legion play after beating Destrehan-based ES&H Wednesday.

“Going into the season I didn’t know what to expect, blending all these different schools, but it’s been great,” Riehm said.

“There hasn’t been any conflict at all. They’re like best friends now. They’re coming together and playing together as a club. We’re winning some games and, hopefully, we’re laying a foundation for the future.

“The toughest thing, from a coaching stand-point, is getting all the pieces to come together because you have 18 high school starters.”

That can make for some interesting lineups.

Vicknair was just named the Class 2A All-State Outstanding Player.

Roussel pitched  a three-hit shutout against the Rebels in the semifinal.

“Everybody on this team is experienced and good,” said Comet Jacob Jensen.

Regardless, they certainly seem to be having fun and they are focused on winning. They would love to get to the American Legion World Series to be held in Shelby, N.C. next month.

Together, the players offered their summer  mantra: “Hashtag Road to Shelby.”