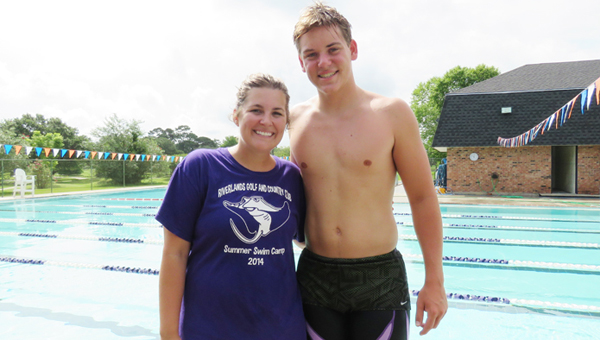 Lindsey Eichhorn Vicknair, left, and her new assistant Alex Miller are leading the Riverlands Stingrays Swim Team through the summer.

LAPLACE — Lindsey Eichhorn Vicknair did not take to swimming like a fish to water.

Essentially forced to participate by her parents and her grandmother, who actually started the swim team at Riverlands Country Club, Vicknair said she spent the first three years mostly clinging to the sides and crying through her lessons.

“My parents were just about ready to give up and then my brother, Robbie, started swimming,” Vicknair said. “I saw that he could do it so I sucked it up and said I could do it.”

With her competitive gene engaged, Vicknair fell in love with swimming. She eventually became a swim teacher, carrying on a legacy begun by her grandmother, Janet Hymel.

“My parents lived on the golf course and the country club had this beautiful swimming pool, but they didn’t’ have a swim team,” Vicknair explained. “So she started one. She teases me now when I complain about having to do heat sheets. She did hers on a typewriter.”

For the past nine years, Vicknair has coached the Riverlands Stingrays Swim Team, coaxing a generation of children off the sides and into the pool, where they get to challenge themselves with a little friendly competition.

While some may grow up to be future Olympians, most are there to beat their own best times or that of their friend, their neighbor or sibling.

There is competition out of the pool, as well.

Vicknair reports there are a healthy 106 Stingrays between the ages of 5 and 18 this summer, up slightly from last year. That includes a larger-than-ever number of 6-and-unders.

The numbers usually drop off, however, once the boys hit 13-14.

“That’s when they’re getting to high school,” Vicknair said.

“They have football and baseball and weight lifting and conditioning and they find they don’t have the time anymore. Some of them come back when they’re 17-18.”

Some just come back when they can.

Vicknair said some of her girl swimmers will come to meets, compete in the early events, then leave to play softball.

“Then they’ll come back for the butterfly and the relays,” Vicknair said.

“I remember wearing my swimsuit under my softball uniform too,” Vicknair said.

“We’d run off to our softball games and come back to the swim meet. God bless our parents.”

Vicknair is still a multi-tasker. She just gave up her full time teaching career to launch a new business and she doesn’t just coach the team, she teaches swim lessons too.

“You just do it,” she said. “When I don’t have a ton of things going on, I feel like I’m not productive.”

It helps to have help.

Vicknair has a new assistant coach this summer in 17-year-old Alex Miller, a rising senior at St. Charles Catholic.

Miller, who swims year-round, made the rounds of the local swim clubs before landing at Riverlands nine years ago.

“It’s where I was meant to be,” he said. “I just like the people. It’s a friendly atmosphere.”

He had been wanting to give coaching a try. Miller is learning that it’s not that easy.

“The little kids are easy,” he said. “Getting the older kids to listen, that’s hard.”

Vicknair has seen Miller come up through the ranks and says he is a perfect fit.

He didn’t always take to the water either, however.

“My first time I was at the pool, I fell in and almost drowned,” he said. “Somebody had to jump in and save me.”