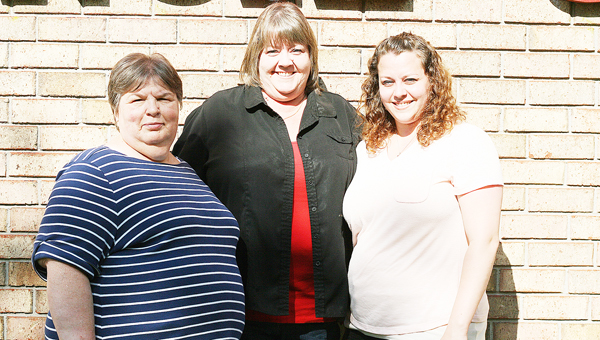 LAPLACE — Whether it’s helping St. Joan of Arc Church, the Knights of Columbus Council 5935 or St. John the Baptist Parish, KC Women’s Auxiliary members are always there to lend a hand.

Shelby Wildes, 25 and the youngest member of the Women’s Auxiliary, said her first steps were taken at the KC hall, pictured above, located at 346 Fir Street in LaPlace. (Raquel Derganz Baker/L’OBSERVATEUR)

Auxiliary President Nancy Ocmond said the group of 10 women is also part of a state organization.

“Through the state, we donate money to organizations such as Keep Christ in Christmas,” Ocmond said. “Our community committee works with the state Auxiliary that gives out presents to Marines or buys things and sends them to military members overseas. We also help give a scholarship to a seminarian at Notre Dame or anywhere in the state of Louisiana.”

On a local level, Ocmond said the Women’s Auxiliary does anything the church asks.

“We donate our money and time to the church,” she said. “During the St. Joan of Arc fair, we man the food booth. The Knights cook the food, and we serve it. We also pick an outstanding eighth grade student of the year, a boy and a girl, and give them a scholarship.”

Once chosen by the Women’s Auxiliary for the scholarship, the students get to move on to the state level for a chance at a another scholarship.

“To win the scholarship the student has to be a Catholic in good standing,” Ocmond said. “They could be in public school and still be a part of it. They have to have the pastor write a statement about them and the different things that they do in the church.”

In the past to be a part of the Women’s Auxiliary, you had to have a family member in the Knights of Columbus, but that is no longer a requirement.

Wanda Wildes, Women’s Auxiliary treasurer, first became part of the organization because of her father. After his passing two years ago she has remained dedicated the Auxiliary and supporting the Knights.

“He was very active with the Council,” Wanda said Tuesday with tears in her eyes. “Now my husband is a Knight and my son is also in it. They are soon going to be officers, which is something I would have never thought would happen.”

Wanda and her daughter Shelby, also an Auxiliary member, feel it’s a great way to continue the family legacy by staying active.

“We have the kitchen open and sell hot dogs, nachos, hamburgers and stuff,” Shelby said.

“It’s our way of helping out the Knights.”

At 25, Shelby is the youngest member of the Women’s Auxiliary.

“I look at being a member as a way to help out people and also the church whenever they need it,” she said. “I don’t even live in the parish anymore but I still come back and help. I grew up at the KC hall, I literally took my first steps here.”

With only 10 members, Shelby said those in the organization would love to have new members join.

“We’re so small now that we can’t do all of the things that we used to do,” she said.

“We used to have bake sales and fundraisers, and we could give more money to the community. I can remember growing up and everyone getting ready for the bake sales, the calendar sales and all of those other things. I remember how much we used to give and how much we used to do. It would be so awesome if we could get more people to join and help us by becoming a part of the organization.”