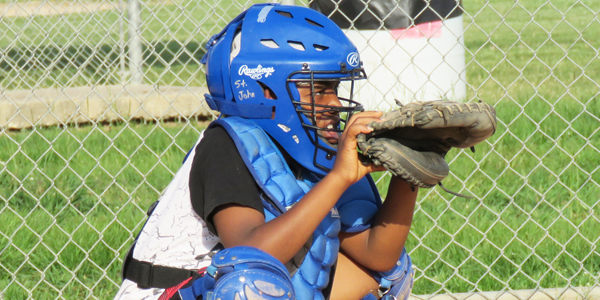 DaKari Taylor, 10, of Garyville gets ready to receive a pitch during baseball practice Wednesday.

RESERVE — Kerry Watkins has a dream.

He sees a huge recreation complex, one with a lighted football field, soccer fields, baseball fields, a nice walking park and a gym. It’s all state-of-the-art and well-maintained and used by children. Lots and lots of children.

St. John Warriors baseball players congratulate
their opponents following a baseball game recently. More than 200 youngsters have signed up to play baseball this
summer for the Recreation Department.

It may seem like a pipe dream to some, but, after a little more than a year as St. John the Baptist Parish recreation director, Watkins has seen quite a few of his dreams come true.

He has seen participation nearly double, programs grow from a handful to a virtual smorgasbord and has seen the reputation of the department grow from an afterthought in the parish to something to be proud of.

Watkins took stock recently as he took a little break from all the activities taking place under his watch. Summer baseball is underway with more than 200 youngsters signed up to play. The flag football league, in its second year with six teams, just wrapped up its championships last week.

Inside the Regala gymnasium, random folks can come in to play basketball or racquetball. Dozens of women come in for a weekly Zumba class. Another 40 or so young ladies have signed up for a new rhythmic gymnastics class.

Meanwhile, just outside Watkins’ office, there’s a new spray park and there are dozens of women in the pool a couple of times a week for water aerobics class.

Next week hundreds of youngsters will come out for the Recreation Department’s annual summer camp, which offers arts and crafts, team sports, swimming, learning activities, games, contests, movies and field trips over six weeks on both sides of the river.

Later this summer St. John will be hosting the Cal Ripken Babe Ruth 9-10s District Tournament, which will bring seven teams to the parish to compete for a spot in the regionals.

By the end of this month, residents will be able to register and pay for activities online.

In August, the football season will begin with all the parish’s teams now playing under one umbrella for the first time instead of as private independents.

“We’ve finally been able to dismantle all the private football leagues and get them to come to us under St. John recreation,” Watkins said. “It took a year. I held numerous meetings with numerous coaches, getting them in a room with all the directors, presidents of organizations. I had several meetings trying to convince them. We finally got it done about a month ago. It was a big fight.”

It also was somewhat of a coup for the department, which has been competing with the private leagues for players for decades.

That’s quite a lot done in just a year.

“A year non-stop,” Watkins said. “Things are progressing. We’re getting advanced, moving along, adding new programs, trying to keep up with technology. It was just a long, hard push by me and my staff. It was a lot of hard work.”

The department has had a $1 million budget since voters approved a millage in 2012, according to Parish President Natalie Robottom. That’s when the turn-around truly began, she said.

“It’s exciting to see everyone participating,” Robottom said. “I remember what it was and what it should have been. We’re not done yet, though.”

The Council also voted last year to lower the fees from $35 to $15 per child, which helped increase the numbers.

It all has Watkins, a LaPlace native and East St. John High School graduate, hopping.

The department has come so far, in fact, that Watkins was able to hire Lamont Bigham as programs coordinator.

“I’ve seen where this department came from,” Bigham said. “I remember what it used to be.”

Of course with progress come growing pains. When the basketball program increased from about 140 to 260, Watkins struggled to find enough adults to coach the teams.

“It worked itself out,” he said. “We made it work. I still would like more so we can break the teams down a little more instead of having 15 or 17 kids on a team.”

The baseball numbers increased from the neighborhood of 160 last year, but Watkins said he has no shortage of coaches.

“We have a lot of new coaches, new volunteers,” he said. “We never have a problem with baseball. It’s not an issue.”

Some things come out of the blue. Watkins was surprised when a local resident, whose daughter competes nationally, came to him and offered to teach the rhythmic gymnastics class.

“She just volunteered her services for our recreation program,” Watkins said. “We had try-outs. We had an opening day and a demo with about 70 kids and the following week we had a bunch of people sign up.

I was surprised at the number of participants that showed up.”

The program has made St. John Recreation a trailblazer of sorts.

“We’re actually the forerunner of the sport in Louisiana,” Bigham said. “They don’t have rhythmic gymnastics in any of the other parishes.”

“We’re still not where we want it to be,” Watkins said. “We still are lacking in girls participation.

Facility-wise, we need to work on some facilities, gym expansion. We’re running out of room right now.

The facilities we have right now are great, but they still won’t accommodate where we’re trying to be, to be able to host different functions.”

They would like to see a full-fledged softball league for girls. Right now, only a handful of girls have signed up for summer baseball and they have been placed on the teams with the boys.

“We pushed it,” Watkins said. “We’re still pushing for it. We’ve been in contact with the coaches who said they would bring them in. It just didn’t happen.”

“A one-stop shop,” he said, wistfully. “A big, attractive sports complex. The main attraction. That would be great.”