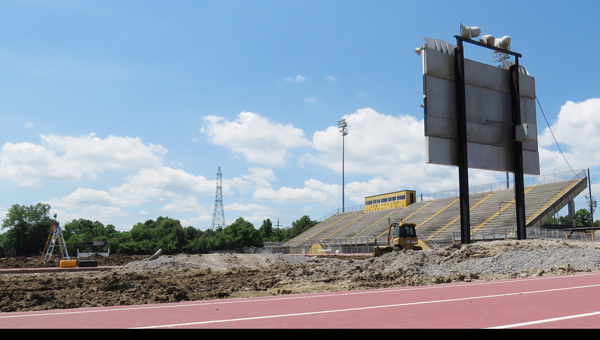 The football field Joe Keller Memorial Stadium, home of the East St. John Wildcats, is seen above Monday morning in LaPlace in a state of replacement. The LaPlace stadium and the one at Rudy Dinvault Field in Edgard, home of the West St. John Rams, is having synthetic turf fields installed for the upcoming football season. The $1.8 million project is expected to be completed by the end of July. (Lori Lyons/L’OBSERVATEUR)

LAPLACE — Most high school football coaches are very protective of their fields and the grass that grows upon them, often taking better care of them than of their own lawns.

But when a couple of backhoes showed up at East and West St. John High Schools April 30 and began tearing up all that nice, green grass, neither Wildcats coach Aldon Foster or Rams coach Brandon Walters shed a tear.

“We’re excited,” Walters said. “It’s a huge plus for our program, to be a 2A school and have the kind of facilities we’ll have. It will be great for our kids.”

Foster said the new field at Joe Keller Stadium will be a great plus for the community.

“We have all kinds of people using our field,” he said.

“We have everything from elementary kids to junior high kids to high school kids. Just the wear and tear on it. This is going to be great for all the kids of St. John Parish. Everyone is very excited to have turf.”

Mid-America Golf and Landscape, a company based in Missouri, is in charge of the project, the same company that installed turf fields at Hahnville and Destrehan High Schools in St. Charles Parish, along with Wesley Barrow Playground in New Orleans and the LSU football practice field in Baton Rouge.

Peter Montz, the purchasing director for St. John the Baptist Parish Schools, said the $1.8 million project includes the scraping of the current fields, installing sub-surface drainage and stabilization and the installation of the turf.

The project is expected to be completed by July 30, with the fields ready for play when the 2016 season begins in August.

Montz said the fields are expected to hold up for at least a decade.

“When we do have to redo it, it will be less expensive because all the sub-surface work will already be done,” Montz said.

Foster said a security system will be installed to help protect the field from vandals.

“We have to protect our investment,” he said.

St. John School Board Member Russ Wise said the funds for the project came from the settlement of a lawsuit that had been filed several years ago by the Board against a vendor over unpaid taxes.

As part of the settlement, the defendant offered to resurface both football fields.

The School Board opened the bidding process early this year, but had to start over in March due to a paperwork technicality, Wise said. Mid-America was the ultimate winning bidder.

The big winners, of course, will be the athletes and coaches of St. John Parish, who will get new state-of-the art football fields upon which to play their games.

“It’s a great morale boost for everybody,” Foster said.

The dirt from the fields also will be put to good use. Walters’ practice field will get some to fill in some low spots; the baseball field at East St. John will get some filler for its outfield.

The only thing Walters was disappointed in was the color of the coming grass. He said there had been a good deal of talk about letting West St. John have blue turf, similar to the famous blue field at Boise State University.

“We thought we were going to get it,” he said.

“We were disappointed. I’m happy to get green, though.”

The main benefit for Walters and Foster will be upkeep. Coaches no longer will have to spend hours maintaining the fields or painting logos and lines.

“I’m kind of excited about not having to paint the field any more,” Walters said. “You’d have to spend hours out there, hoping it didn’t rain.”