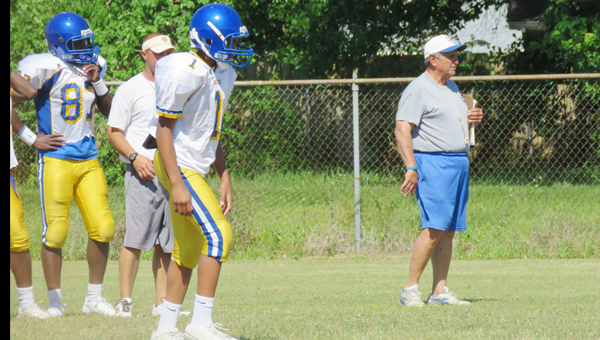 Although Walters has been at the school in Edgard for 11 seasons, all of them were as an assistant. This was his first as a head coach.

He had a lot to learn, he said.

Going into the spring, Walters was looking to find himself a new quarterback now that Jermoine Green, L’OBSERVATEUR’s Offensive Player of the Year, has graduated.

As the spring progressed, however, Walters became worried about a few other things.

“I realized some of our players weren’t as committed to us as I’d like them to be,” he said. “We have to work hard. Those that we did have worked hard.”

St. Charles Catholic football coach Frank Monica was missing some players too, but not for any lack of effort. Several of his projected starters, including starting quarterback Lloyd Nash, were off playing baseball.

“We put little Justin Dumas back there,” Monica said. “He’s an eighth grader. We just put him in the shotgun and let him hand off.”

Monica also is missing quite a few players whose eligibility ran out when they graduated Friday night. Monica must replace 20 of 22 starters from last year.

It’s a tough task, he said.

“We threw a lot at them and hoped that something sticks,” Monica said. “We made a lot of mistakes on offense but we played real, real fast on defense. Our defense is really small. We’re like a bunch of supergnats. We’re not really big or tall. Offensively, we’re really big and slow. What’s making us slow is the fact that we don’t really know what we’re doing. The main thing you want to get out of spring, really, is a depth chart.”

Riverside Academy coach Bill Stubbs also was missing quite a few of his players this spring, including projected starting quarterback Jordan Loving, who were still playing baseball.

“We were very limited in what we could do on offense,” Stubbs said.

The veteran coach is used to that kind of challenge, however.

“It just gives other kids a chance to compete for spots,” he said. “They got a lot of playing time.”

Unlike the other three St. John the Baptist Parish teams, Riverside did not have a spring game. His Rebels will have a “controlled” scrimmage following Tuesday’s regularly scheduled practice.

East St. John, meanwhile, was the first to have — and win — a spring game against McDonogh 35.

The Wildcats are looking to improve on last year’s 2-8 finish under first-year coach Aldon Foster.

Quarterback Marquise Darensbourg, who missed much of last season while awaiting a ruling on his eligibility after transferring from Destrehan, threw two touchdown passes, both to C.J. Turner.

“Our defense really dominated,” Foster said. “We did to them what they had done to us last year.”