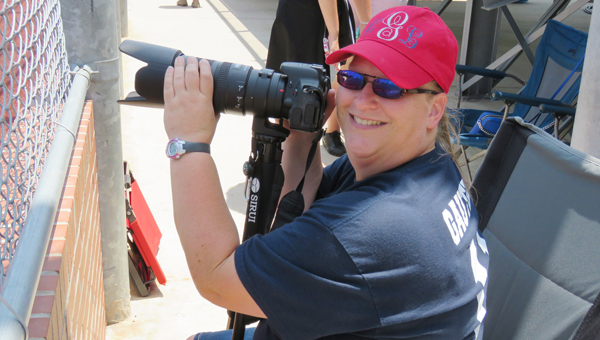 RESERVE — Some moms go to their children’s high school events. Some moms even take pictures at those events and post them on websites or social media.

Usually the one to take pictures, a friend had to take this photo of Chadna Gauthier and her son Tyler at the football team’s Senior Night in November. Tyler also played soccer and baseball for the Rebels, with Chadna there to document the action. (Courtesy of Chadna Gauthier)

Chadna Gauthier goes way above and beyond that.

The single mom of Riverside Academy standout athlete Tyler Gauthier has documented virtually every event her son has participated in, along with most of those of his friends.

Over the years she has become well known for her presence on the Riverside side with her digital camera, long-range lens and monopod.

Of course she focuses in on her son Tyler, who played football, soccer and baseball for the Rebels, but she also has captured other amazing moments by his teammates and friends, who know soon, all of them will be posted on her Facebook page for them to download and share.

“If they’re not posted soon, they come find me and say, ‘Where are the pictures? You haven’t posted them yet,’” Chadna said. “So yeah. They look forward to it.”

She has kind of spoiled them.

Just last week Chadna posted hundreds of photos of the baseball and softball teams, both of which had successful seasons and long playoff runs.

Then she posted a couple hundred more from prom night, including the after-prom party, and then graduation.

“It took about three hours,” she said.

Last weekend, Chadna and a whole lot of other Riverside moms and dads spent three hours driving to Sulphur to watch the Rebels take on rival St. Charles Catholic in the Class 2A baseball semifinals. Of course she took more photos, which she will post to her page — right after she finishes those from graduation and Sunday’s spring sports banquet (at which Tyler was named the male athlete of the year).

“She’s at every single event that we have at school,” Tyler said. “She really busts her butt getting there too. It’s not just me, either. She takes pictures of everybody.”

It helps that Tyler and his mom have a special relationship, forged by his being an only child.

“She’s the strongest lady I know, dealing with everything, being the only one working, providing for me and being able to clothe me and feed me. I couldn’t ask for a better mom.  She’s at all my games, getting off work early and speeding probably to get there. She just means the world to me.”

Chadna said her photographic passion started as a little hobby with a small camera.

Now that Tyler has graduated and is about to go off to college, but Chadna won’t be left without a subject.

“Everybody now is, like, are you coming back?” she said. “That’s what everybody keeps asking. Well, my nephew plays football and my niece plays volleyball, so I’ll be around taking pictures.”