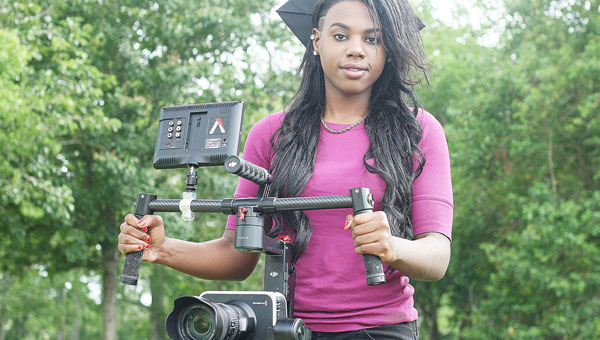 LAPLACE — When David Grubb first sat down with Arin Cindy Kae Ryan he knew she was different.

Grubb, director of communications and marketing at Dillard University, recently met Ryan when he was putting together a release about her and the valediction.

“At first we asked basic questions like how does it feel to be salutatorian,” he said. “As we got into it, it became more of a conversation about the path that she took to get there. I think that was the most interesting part.”

Grubb said Ryan, a LaPlace resident, worked hard in film becoming one of the top students in the program.

“With any university, you want students to come in, find themselves and discover what their real passion is,” he said. “You would think that film people, especially someone who wants to start her own production company, would be outgoing. But Arin has an analytical part even though she is a creative person.”

After graduating from FHD Christian High School in LaPlace, Ryan set her sights on Dillard. When she first started college, Ryan was a biology student but after an internship her freshman year, she decided medicine wasn’t for her.

After thinking about what she liked to do and taking in the fact she was a wizard with cameras, Ryan changed her major to film.

“I had to think about what I really wanted to do and what I really enjoyed,” she said. “I was already doing photography and stuff in high school. I looked deeper at classes with cameras at Dillard. I was lucky because film just became their own department.”

Ryan, 22, graduated from Dillard University May 7 with a degree in film and a minor in art.

“With film I felt happy and I felt like I was doing what I was supposed to do,” she said. “I felt like I fit in. I added art as my minor my last semester. I was finally doing everything that I loved.”

The young LaPlace resident wants to become a film producer. Her favorite part is making a story people can relate to.

“I want people to really feel what I put on the screen,” she said. “I want them to have a connection with what I make. I also like to change people’s views on things.”

Ryan has already produced a number of dramatic and action short films, but the dramatic ones are her favorite. Growing up in LaPlace and going to school in New Orleans means Ryan was able to take advantage of the growing film industry in Louisiana.

“I’ve worked with a few independent movies like ‘The Dunning Man,’” she said. “I worked on ‘Rodeo and Juliet’ that made it to TV.”

Ryan has been recognized for her film work as a crew member on the film “The Cutoff,” which was among the top 10 films at the Louisiana Film Prize contest, and she worked on “Cover Me,” which premiered at the 2015 International Film Festival.  She was also behind the scenes on the Big Easy Award Nominated play “Shine On.”

“I’ve gotten a lot of experience,” she said. “I’ve set up equipment for films, set up lighting, and heavy duty stuff. I’ve also driven actors around and I really liked doing that. By driving them to their hotels and the set, I get to talk to them and build a connection. I’ve also had the opportunity to be a production assistant.”

Dillard means a lot to her family, Ryan said, adding she is the fourth one in her family to graduate from there.

“When they found out I was a salutatorian, I think they were more happy for me than I was,” she said. “I was happy but they were really happy. It meant a lot to them.”

After taking a year off, Ryan said she plans to attend graduate school to learn more about business and financing. She hopes to open her own production company.