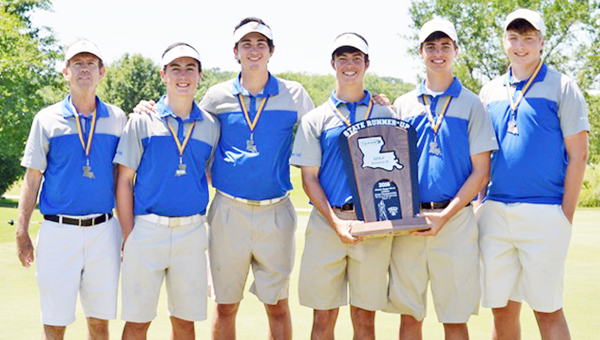 CARENCRO — They say good things come to those who wait.

Competing as a team at the state tournament for the first time since 2012, and two days late thanks to a weekend drenching of the Lafayette area, the Comets shot 323 Wednesday and 315 Thursday to finish as Division III state runner-up at The Farm d’Allie course with a two-day score of 638.

It is the school’s best finish since winning the state title in 1982.

Sophomore Mikey Landry finished as the individual state runner-up in a three-way tie with Newman’s Price Butcher and University’s Parker Johnson after shooting a two-day score of 144 (71-73).

“I am so proud of this team and everything they accomplished,” Comets coach Gary Zeringue said. “We played our best golf when it mattered most. In other sports, coming out second is devastating, but in an eight-team championship tournament against extremely tough competition, there is no shame being the runner-up. They are truly deserving to come home with a trophy and medals recognizing them for their success.”

The unflappable Landry said it wasn’t his best week.

“I didn’t hit the ball real well all week,” he said. “I was up and down a lot. I only shot four birdies and four bogies all week, so I was at least consistent.”

Landry said he tried to stay self-contained while on the course and not let others affect his play.

“I didn’t want to know anyone else’s scores all day,” Landry said. “I just wanted to play my game.”

He knew it was close, though, for him and for the team.

“Coach Z does the math after every hole it seems like,” Landry said. “When I came in, everybody was already pretty excited. We knew it would be close.”

After finishing his final round, Landry said he went out to the 18th hole to watch the last group come in. There LSU golf coach Chuck Winstead, the father of Trey, let slip some results.

“He started saying some scores and that’s kind of how I found out,” Landry said. “I didn’t know if I was second or third. I knew it was going to be real close, though.”

One of the Comets’ other surprises Thursday was Will Torres, who shot a team-high 92 Wednesday then came back with a 74 Thursday.

“He came in clutch,” Landry said.

St. Charles was in third place after Wednesday’s first round, with a combined 323, trailing University High’s 299 and Catholic of New Iberia’s 317 and one shot ahead of Dunham (324). Landry was tied for fifth place at one-under par 71.

“We were concerned playing the first round without a practice round because of the rain,” Zeringue said. “The guys battled through it and posted a better second round.”

Landry was the sole Comets golfer to compete last year. He  was thrilled to be joined by his teammates this time.

Added Zeringue: “We truly had a team mindset and a good chemistry.”